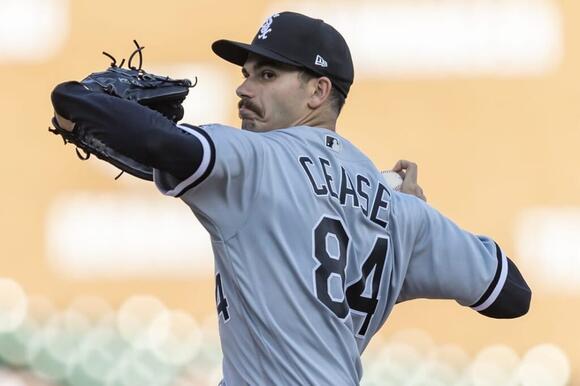 Dylan Cease won a duel of two hot pitchers and Gavin Sheets doubled twice and drove in a pair of runs as the Chicago White Sox made it two in a row over the host San Francisco Giants with a 5-3 interleague win Saturday afternoon.

Two throwing errors on potential double play grounders contributed to all five Chicago runs, helping the White Sox win for a third time in their last four games while sending the Giants to a ninth defeat in their last 12 contests.

After serving up a home run to LaMonte Wade Jr. with his second pitch of the game, Cease (7-3) limited the Giants to just three more hits and no more runs in his five innings. He walked three and struck out four in running his record to 3-0 with a 0.39 ERA in his last four starts.

Wade’s homer was his second of the season.

The White Sox took the lead for good in the fourth against Giants starter Logan Webb (7-3), who had pitched to a 0.45 ERA in his previous three starts, going 2-0.

A bit of bad luck prevented Webb from building upon his impressive numbers when, after Tim Anderson led off the fourth with an infield single, first baseman Brandon Belt threw wildly to second on Andrew Vaughn’s potential double-play grounder, putting two on with none out.

A groundout and walk later, Sheets smacked his first double to left field, scoring Anderson and Vaughn. When Yoan Moncada followed with a single to right, Jose Abreu scored to complete a three-run inning.

A two-run Chicago sixth followed a similar script, only this time Sheets’ double helped set the stage for the San Francisco miscue.

With the bases loaded and one out, Webb got Leury Garcia to ground to Belt, who went for the double play and forced Moncada at second. But when shortstop Donovan Walton threw wildly to first, Abreu and pinch-runner Adam Haseley scored to make it 5-1.

Webb was pulled at inning’s end, charged with five runs (three earned) on six hits. He walked one and struck out five.

The Giants chipped away with single runs in the eighth and ninth on RBI hits by Darin Ruf and Belt, and brought the potential winning run to the plate with two outs in the ninth. But Kendall Graveman nailed down his fifth save, and second in two days, by getting Mike Yastrzemski to ground out with two on to end the game.

Anderson and Moncada joined Sheets with two hits apiece and Abreu scored twice for the White Sox, who improved to 6-3 in interle…