by postolink.com 1 month ago1 month ago
176views
86
18 shares, 86 points
DALLASBASKETBALL 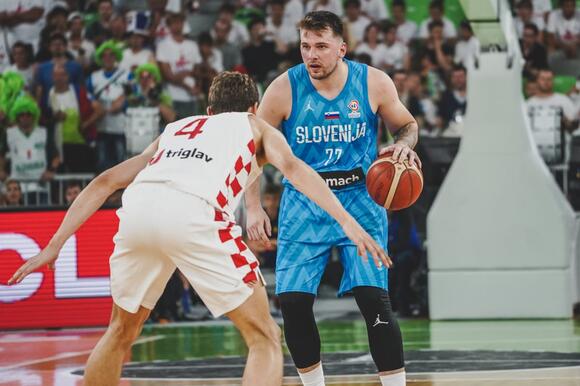 Doncic and Dragic put on a show in Slovenia’s win.

Luka Doncic was displaying his usual bag of tricks in Slovenia’s World Cup Qualifying match against Croatia on Thursday. Whether it be a step-back 3, or a behind-the-head pass to Zoran Dragic, the young Dallas Mavericks phenom did not disappoint. Slovenia jumped out to a quick 25-point lead at the end of the first quarter and never looked back, winning by the final score of 97-69.

Doncic had 21 points, eight rebounds and 10 assists. He also had two steals as well in 30 minutes of play. The Mavericks’ front office was no doubt keeping an eye on Doncic, as well as one of his Slovenian teammates, Goran Dragic . Dragic made his return to international team play for the first time since 2017. He added 19 points in just 22 minutes of play. Many expect Dragic to join Doncic with the Mavs at some point this summer in NBA free agency.

With the young face of the franchise and potential free agent signee running the show, there was plenty to be excited about from a Mavs perspective. After the game, Doncic even grabbed the microphone and began an “M-V-P” chant for Goran Dragic as the two embraced at middle court. Along with his 19 points, Dragic also chipped in four rebounds, three assists and a steal. He finished shooting an excellent 50 percent from the field.

Some fans would prefer that Doncic take the summer off to rest his body to become fully rested and ready for next season with the Mavs. However, he looks to be in incredible shape while leading his Slovenian national team to qualifying for next…