As many as one in three patients at some hospitals are unable to be discharged despite being medically fit due to a lack of social care provision.

But so-called “virtual wards” have been introduced as part of the NHS’s plan to tackle the problem, which is exacerbated by the usual winter pressures on the service.

Sky’s health correspondent Ashish Joshi spoke to one man who is on one of the first virtual wards and is using the new app.

Brian Fairfax empties the contents of the box on the table.

He puts a thermometer, a blood pressure monitor and an oximeter on the table. 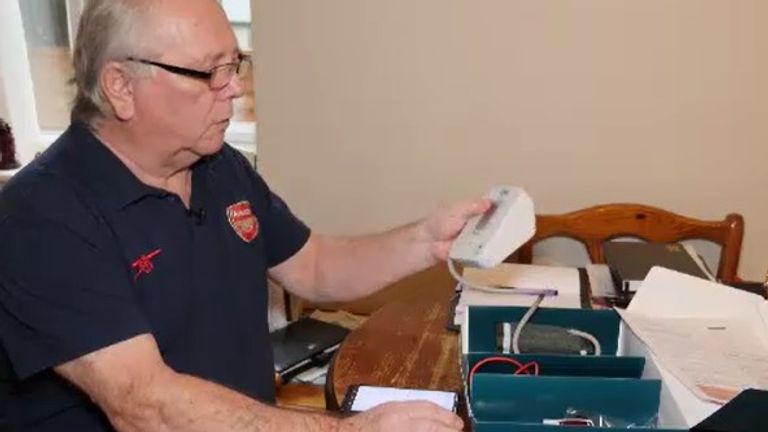 Brian uses the simple tools in his box, and his smartphone app, to give doctors a regular picture of how he is doing

Brian is recovering from an operation. A few weeks ago, he had replacement knee surgery after spending a year on a waiting list.

But the wait for the operation was not the only thing that caused him some anxiety.

“I don’t know anyone who likes being in hospital, so the sooner you get in and out, the better,” he says.

Brian was worried about how long he would have to spend in hospital after the operation.

“My wife is infirm. Although she’s got carers that come, I’m her main carer, so I have to look after her,” he explained.

As we talked, his wife Pam lay in a bed in a rear room of their bungalow just outside Stevenage in Hertfordshire.

“Although I still can’t do the shopping and things like that at the moment, my daughter does, but I just generally wanted to be at home with my wife.” 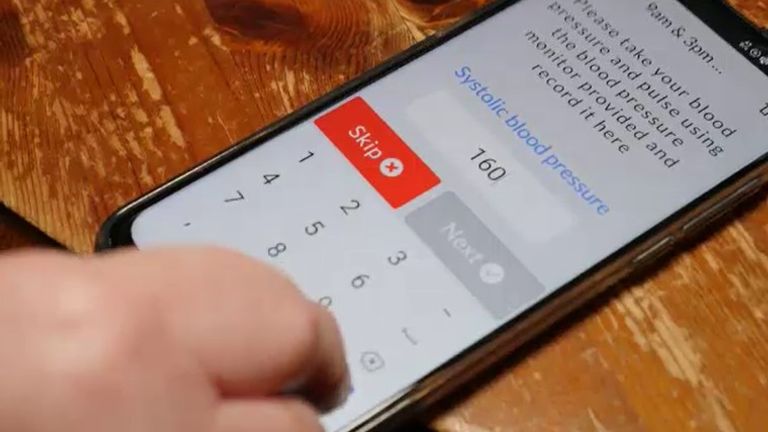 Read more:
Nearly all the £3.3bn NHS funding announced by the chancellor will be eaten up by inflation and growing demand
Nurses give government five days to open pay negotiations, or they’ll strike in December

Brian, a retired electrician, is otherwise medically fit, but the recovery time following a routine operation like knee replacement could mean spending up to a week on a hospital ward.

But the simple tools in his box mean he can be monitored at home by entering basic readings into the healthcare app on his smartphone.

In doing this, Brian is a patient on a virtual ward. His readings, taken three times a day, are analysed remotely.

If they generate any warnings, he will be called or even visited by a health worker.

This is the sort of technology that it is hoped will stop some people from needing to call an ambulance or take up a hospital bed. 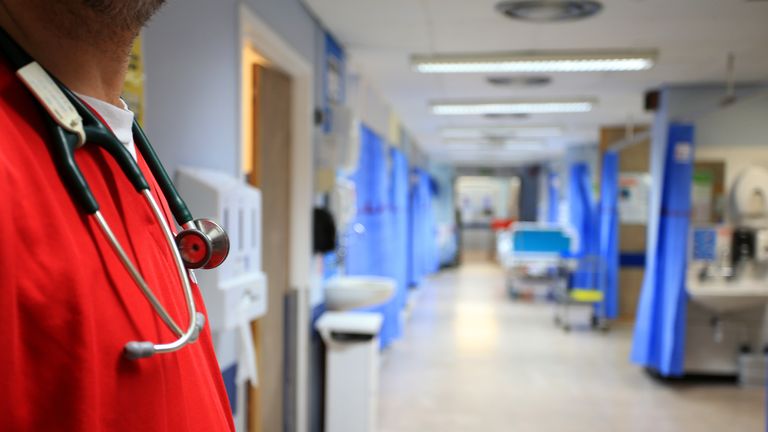 It also means that Brian does not need to be visited by a community nurse unless it absolutely necessary. That frees up the nurse for other potentially more vulnerable patients.

The virtual wards are monitored in control centres that look just like ordinary offices. Clusters of desks with staff on telephones, all staring at their computer screens.

The one in Stevenage that looks after Brian monitors up to 90 patients at home at any one time.

Dr Elizabeth Kendrick, medical director at Hertfordshire Community NHS Trust, explains what her teams are doing as we walk around the virtual hospital.

“On this screen you can see we’ve got several of our patients on our virtual ward who are having a variety of their observations being looked at,” she says pointing to a PC in front of us.

“We have doctors here who are part of the team, we have GPs who we recruited, and they are going through the whole ward.”

As many as one in three patients in some hospitals are medically fit to be discharged, but cannot be because of a lack of adequate social care.