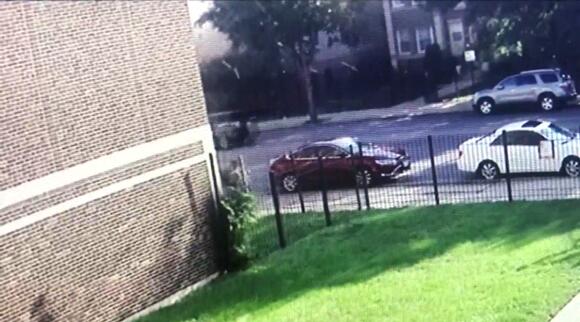 CHICAGO (CBS) — Video obtained by CBS 2 on Wednesday shows an explosion at a South Austin neighborhood apartment building that injured eight people the day before.

Meanwhile, as CBS 2’s Steven Graves reported Wednesday, residents returned to the site of the devastation Wednesday. They picked up their belongings and left.

Many went on to a nearby church, Circle Urban Ministries at 118 N. Central Ave., nearby to sleep on cots. And they are wondering what went wrong.

Two clips were obtained by CBS 2’s Steven Graves. Taken from different angles, both show a person running who appears to be holding a small child running for their life — narrowly missing the blast and a shower of dust and debris that come crashing from the four-story apartment building at 5601 W. West End Ave.

One angle also shows a bright yellow or orange flash before bricks and wood fly from the building.

The explosion and collapse happened around 9 a.m. Tuesday. Eight people were rushed to area hospitals. Three of them were left in critical condition, with the most seriously injured patient suffering “very traumatic burn injuries.”

Deputy Fire Commissioner Marc Ferman said Tuesday that one of the people who was injured was across the street at the time.

“It’s devastating,” said William Pitts. “It’s like starting all over.”

Pitts lived on the second floor of the building. He was one of about a dozen people who returned Wednesday to pick up belongings, which building owners told residents was safe for them to do.

But video given to CBS 2 by people inside shows there is clear devastation. A hole was seen blasted through the wall, and debris was scattered on stairwells.

Younger, a mom, is sleeping on a cot at a nearby ministry with her small son. She was also allowed back into the building to collect her belongings earlier.

“That’s the hardest part, seeing him. You know, him having to see him mom broken and having her start over,” she said. “I pay rent every month so I can have a place to have my son lay his head. Not a couch, not a floor – he got a bed, a room.”

On Monday, CBS 2’s Kris Habermehl initially reported the debris pattern from the explosion has all the patterns of a natural gas explosion, and Nelson said smelled natural gas in the air after the explosion.

However, a Peoples Gas spokesperson said the cause of the explosion remains unknown, and “there is no reason at this point to believe the cause is related to gas or any of our equipment.” As to the question of a gas explosion, …