Video released of Pilsen shooting that led to charges against... 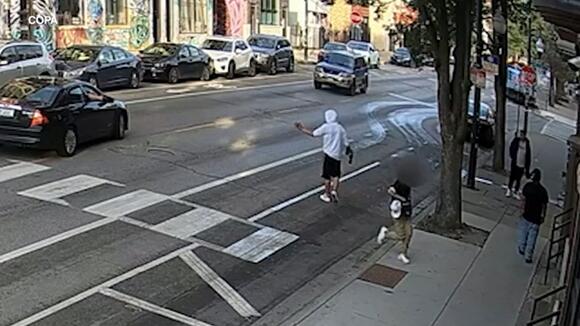 Video was released Tuesday of a police shooting that injured two people in Pilsen. A police sergeant and an officer both face felony charges in that July shooting.

The officers were not wearing body cameras, but video released by the Civilian Office of Police Accountability from a camera on the street appears to contradict the officers’ initial statements that they were fired upon first.

He’s trailed by a male juvenile, who prosecutors say had a gun in a satchel.

In a nearby, unmarked CPD vehicle is Sgt. Christopher Liakopoulos and Officer Ruben Reynoso, who were headed to a training course when they stopped to confront a group on the street.

Medina and the juvenile approach the cops before the juvenile stops and turns to leave. Medina appears to show his hands to the officers, who then both open fire.

Eyewitness News has frozen the video before Medina is hit, and falls to the ground.

Seconds later, Reynoso and Liakopoulos are out of the car returning fire after prosecutors say the juvenile shot at them. A bystander is grazed in the leg.

Another camera captured the sound of gunfire: first, the shots that hit Medina, and then the shootout between the officers and the juvenile.