Trump’s legal team is trying to avoid turning over information... 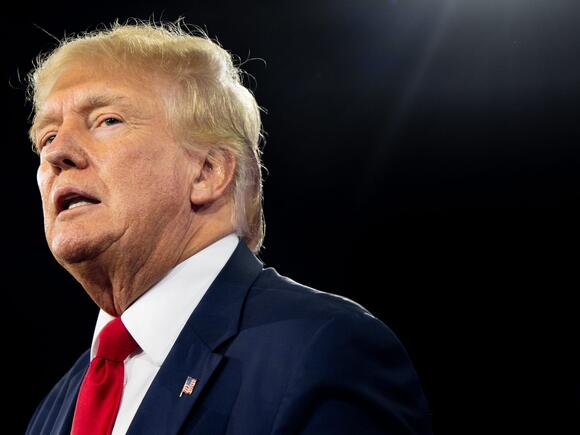 At the center of the most recent issue is a set of top-secret materials that were seized in the FBI’s August 8 raid of Mar-a-Lago. Trump claims he had declassified everything the FBI found . Dearie is asking that Trump’s team hand over specific information regarding whether files were declassified or not.

In a September 19 filing , Trump’s team appealed Dearie’s request in order to avoid revealing details about the top-secret materials.

Trump’s lawyers are arguing that there’s a “time and place” for Trump to “disclose specific information regarding declassification to the Court and to the Government,” per the filing . They’re asking that Dearie not require his team to hand over information about whether documents were declassified or not.

Trump’s lawyers argue that handing over these documents would force Trump to “fully and specifically disclose a defense” that he might try to mount to fight off any “subsequent indictment.”

The former president’s lawyers are also questioning Dearie’s suggested deadlines, arguing that his draft plan “compresses the entirety of the inspection and labeling process to be completed by October 7, 2022.”

“We respectfully suggest that all of the deadlines can be extended to allow for a more realistic and complete assessment of the areas of disagreement,” Trump’s lawyers wrote in the filing.

Dearie has until November 30 to finish reviewing the documents seized by the FBI. During its raid of Mar-a-Lago, the agency seized 11 sets of classified documents , including some marked “top secret.” The DOJ is looking into whether Trump broke any of three federal laws — including the Espionage Act — by keeping the documents at his Florida residence.

Last week, the DOJ appealed Judge Aileen Cannon’s initial decision to appoint a special master on the case. The DOJ has also requested a partial stay on Cannon’s decision around classified documents as it prepares a formal appeal, which could result in the case dragging on and making its way to the Supreme Court .