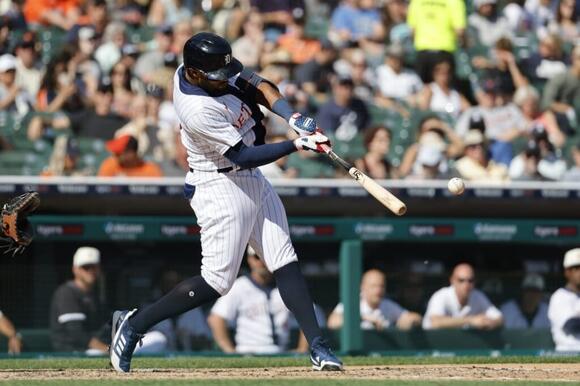 Eric Haase led an 19-hit barrage with three hits, including a three-run homer, and scored three runs as the host Detroit Tigers snapped a six-game losing streak by thumping the Texas Rangers 14-7 on Saturday.

Tigers outfielder Riley Greene reached base four times in his major league debut, including a pair of singles.

Adolis Garcia and Cory Seager homered for the Rangers.

With two out in the first, Garcia hit a 1-2 Garcia fastball over the left-center field wall.

Detroit took a 3-1 lead in the bottom of the inning. Grossman’s long ball came on his 163rd official at-bat of the season.

After Haase smacked a double, Baez ripped his fourth homer this season.

The Tigers added a run in the second when Jonathan Schoop scored on Castro’s double play grounder.

Detroit knocked out Hearn while extending its lead to 9-1 in the fourth. Spencer Torkelson led off the inning with a double and scored on Castro’s two-out single up the middle. Castro moved up on a Grossman single and scored on Miguel Cabrera’s single.

Detroit added two more runs in the fifth to make it 11-1. Clemens’ sacrifice fly brought home Greene, who led off with a walk, and Castro supplied an RBI triple.

Texas scored three runs in the sixth. Marcus Semien’s double-play grounder brought in the first run and Seager followed with a solo homer. Garcia then ripped a triple and scored on Baez’s throwing error.

Detroit made it 14-4 in the bottom of the inning. Cabrera scored on a wild pitch, Schoop had an RBI single and Clemens added a run-scoring, ground-rule double.