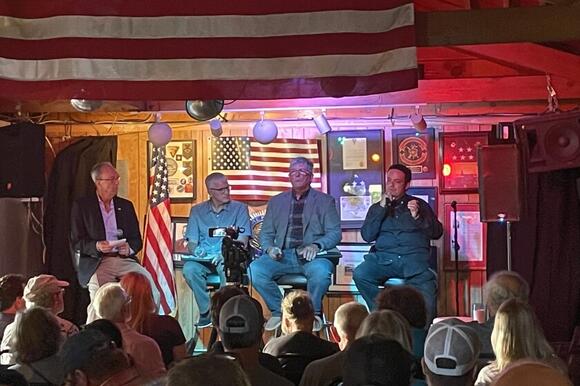 Two challengers in the race for Encinitas mayor tried to make the case that City Hall isn’t responsive enough to the residents during a June 23 debate held at American Legion Post 416, while Council member Tony Kranz defended the council’s recent decisions.

The winner of the mayoral race will replace Catherine Blakespear, who is running for state Senate District 38. A fourth candidate who has filed to run for mayor, Leucadia resident Cindy Cremona, did not participate in last week’s debate. Additional candidates could still file to run before the Aug. 12 deadline.

Throughout the one-hour event, candidates Michael Blobe and Jeff Morris answered questions submitted by the audience by outlining how they wanted to break from the city’s current course on issues including homelessness, public safety and housing.

“That’s why I’m running,” said Morris, a onetime stockbroker and entrepreneur who has owned a cosmetic marketing and custom furniture business. “All of you can get your voice back and regain control of your town.”

One of the questions, which were written on index cards and read by moderator Neil Hokanson, asked about the Goodson project. The proposed project, which would add 250 units in Olivenhain, has been the latest point of contention between residents who feel it doesn’t fit in the community and city leaders who have waning influence over new development due to state housing laws.

Encinitas residents opposed to the project, including grassroots group Encinitas Residents for Responsible Development, have said they’re concerned about fire safety and traffic congestion issues caused by the project.

“I would’ve gone back to the state and said it’s my responsibility to keep everybody safe,” said Blobe, who works in the restaurant industry.

“Local control is a must,” Morris added.

Kranz said that the mayor and council handled it as best they could given state law that allows certain projects to be “by-right,” which limits local oversight in the interest of streamlining construction that could alleviate the statewide housing crisis. The city also recently settled a lawsuit filed by the developer, Randy Goodson, after the city rejected his plans.

“We’re going to do our best to advocate for the projects that make sense for our community,” Kranz said.

On public safety, Blobe and Morris both agreed that the city should sever its relationship with the San Diego Sheriff’s Department and create its own police force.

Kranz said that severing ties with the sheriff’s department would be prohibitively expensive, in part because of pension costs that the city would owe.

“I think our sheriff’s deputies are doing a great job,” he said.

Blobe and Morris also expressed opposition to the city’s approach to homelessness. Blobe said there should be more of an emphasis on addressing mental health issues, and Morris said he was opposed to using hotel rooms for homeless …