The Light We Carry by Michelle Obama review a guide...

In her wonderful autobiography, Becoming, Michelle Obama tells a story about the time her family visited some African American friends who had moved to a predominantly white area in the suburbs. At the end of the visit, Obama’s father discovered that “someone had scratched a line across the side of his beloved Buick, a thin ugly gulch that ran across the door and towards the tail of the car. It had been done with a key or a rock and was in no way accidental.”

How did her father react to this almost certainly racist act? He just “carried on”, as he always did – because he was a “withstander”, someone who could take whatever life threw at him and find a way to keep going.

The Light We Carry, the former first lady’s second book, is intended to be a practical guide to help us all be a bit more like her father (and like Obama herself) and learn to cope with adversity, be it prejudice, a pandemic or the chilling thought of Donald Trump re-entering the White House. In Obama’s words, the aim is to give readers a “glimpse inside my personal toolkit” – the strategies she uses to be “more comfortable, less paralysed, inside of uncertainty”.

The book contains 10 of these techniques, ranging from “starting kind” (it’s best to ignore the first negative thought that comes into our heads in the morning and instead we should be “inviting” a “better and more tender one”) through to “the whole of us” (life is better when “we grip hands with another soul”). Miraculously, these self-help bromides don’t come across as cloying, mainly because Obama is so disarmingly honest about her fears, failures and all-too human flaws.

‘I don’t recall seeing a Black female athlete on television during my childhood, not once,’ she notes

She describes how out of place she felt as a rare African American undergraduate at Princeton in the 1980s, for example, and how in the dining hall she couldn’t help but fixate on what she “assumed were the thoughts running through other people’s heads: there goes the Black girl, looking for a seat”. As she freely admits, that kind of anxiety “can mess with your head if you let it”.

Obama candidly tells us how her grandfather Dandy ended up being “petrified” and trapped by structural racism and hardly ever left his neighbourhood: “Our hurts become our fears. Our fears become our limits.” Breaking this cycle isn’t easy, especially if you’re the victim of discrimination, but Obama’s down-to-earth advice is to focus on the small things, which have the potential to “become an instrument for your own visibility, your own steadiness and sense of connection”. 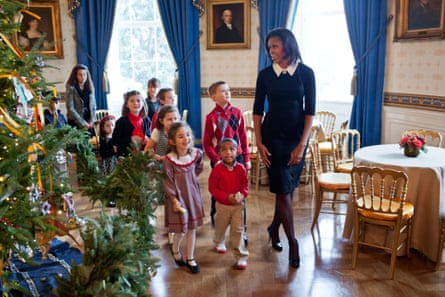 Michelle Obama with children from military families in the White House, 30 November 2011.

British readers may roll their eyes at some of the more earnest Americanisms (“If you know your light, you know yourself”; “Like any good Capricorn, I like to get my bearings before making my next move”), but you can’t argue with the hard-fought wisdom of such an accomplished woman. The former first lady is especially compelling when making the case for more diversity in schools, universities and public life, which isn’t surprising given that she spent years fighting for greater inclusivity before setting foot in the White House.

Obama shows how this agenda makes a difference in other walks of life too. “I don’t recall seeing a Black female athlete on television during my childhood, not once,” she notes, which left her feeling awkwardly bereft of role models as the tallest girl in her class. As she puts it, simply but persuasively: “In life, it’s hard to dream about what’s not visible.”

Despite its many strengths, The Light We Carry isn’t as powerful as Becoming was because it’s too weighed down by its self-improvement tone, which undermines the emotional pull of Obama’s personal stories. But then again, Obama’s first book is one of the best political autobiographies ever written and every bit as brilliant as Margo Jefferson’s righ…