Sizing up the 2022 UC Defensive Line 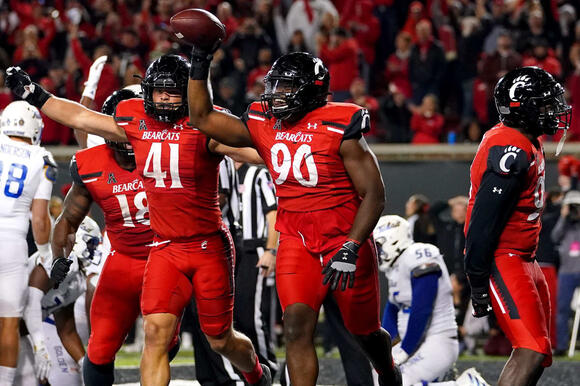 Cincinnati is leaning on a familiar group to anchor in the trenches.

MACON — Several key positions will look different for the Cincinnati Bearcats in 2022. Cornerback, running back, and quarterback are all positions going through an overhaul. Add the defensive line to that list.

Gone are Curtis Brooks and Myjai Sanders, who were both NFL draft picks this past Spring. In is Malik Vann, Jowon Briggs, and Jabari Taylor, along with 11 other defensive linemen on this year’s roster.

Vann, Briggs, and Taylor are the big three. Those guys will anchor this year’s defensive line. They’ll be the ones looking to replace Curtis Brooks’s production.

Malik Vann has steadily progressed during his first four years in Clifton. Last year, he recorded 3.5 sacks and 8.5 tackles for loss.

It was Jabari Taylor, arguably, who saved the 2021 Bearcats season with his goal-line stand against Tulsa. Taylor also added five tackles for loss and two sacks in 2021. But those guys posted those numbers playing behind Curtis Brooks in 2021, behind Elijah Ponder in 2020, and behind the stout defensive line in 2018.

Now, it’s their turn to anchor it. They will be the ones deciding if the Bearcats win in any given game, as this is still a Bearcats football program driven through the trenches.

The last time the Bearcats saw a major turnover on the defensive line was in 2019. But after the first game, it was clear the new-look defensive line was going to be good. That was a testament to the recruiting then, and it is now.

There are players in place to replace the production of the defensive linemen who have departed over the years. And if they’re able to, that will, once again, make the Bearcats a force in the trenches and the team to beat in the American Athletic Conference.

Make sure you bookmark All Bearcats for the latest news, exclusive interviews, film breakdowns and so much more.