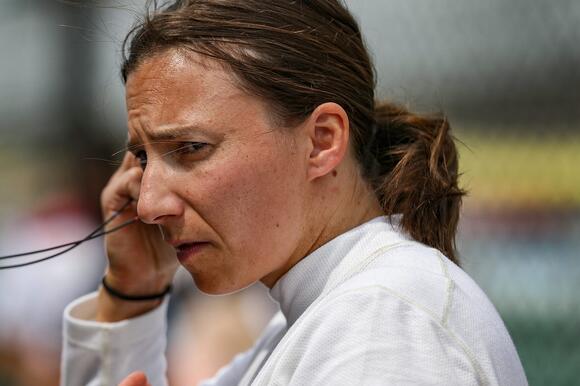 INDIANAPOLIS — As she works her way back into position to race in IndyCar, Simona De Silvestro regularly has to tell herself what to do.

It’s her method of unlearning lessons she picked up in seven years of closed-wheel racing since the last time she was regularly competing in the series. Navigating the subtle differences takes repetition, but also reinforcement” Don’t brake going around corners. Maintain your speed because Indy cars are easier to handle.

It takes time, even if the process hasn’t been quick enough for De Silvestro.

“I think patience is something — I don’t really have it to be honest,” she said. “I really try to get up to speed as quickly as possible. These guys have been running for half a year. Most of these guys and girls have been running a long time in these cars and they really know what to expect, and for me, getting back in the car, it feels a little bit (like) starting from scratch again. Just getting the feel. My driving style is quite different than anything I’ve driven the last few years, so it takes a little bit of time, and I get even more frustrated with myself, because I knew I could do it in the past, but I just need to find my way again.”

More on De Silvestro: Simona De Silvestro: ‘I don’t think we’re too far off’ after first practice at Road America in IndyCar return

De Silvestro made a one-race cameo in IndyCar in 2021, but hasn’t competed as a full-time driver since 2015. Between IndyCar stints, she was most heavily involved in Supercar. On Thursday, she was one of eight drivers at a road course test at Indianapolis Motor Speedway, another step in her transition back to the series in which she spent five years at the beginning of her career. She didn’t compete in the Indianapolis 500 last month, but finished 21st at the Sonsio Grand Prix on June 12 and will race in the Indy 200 at Mid-Ohio on July 3.

It was a hard break that De Silvestro made from IndyCar. In those seven years, she didn’t set foot in an Indy car. She never even drove a prototype, so much of her process in getting back into the series, Thursday included, has been relearning things she used to know. She sees it as starting from scratch.

“I didn’t expect it to be such a big difference, but seven years is definitely a long time when you’re not driving an open-wheel car,” she said. “So just kind of getting my head around it took a little bit. I felt in the race we were a bit more comfortable, and for sure now. Now we’re definitely closer when we look at the lap times.”

IndyCar was often on De Silvestro’s mind even while racing in other series. She watched as drivers she considered to be her …