Robert Lewandowski towers over Qatar as he chases World Cup...

The army of workers tasked with sweeping mini dust mountains from doorsteps across Doha spend long days endlessly battling the elements. In a city constructed on sand, the gentlest of breezes makes it near impossible to prevent the desert from intruding on an otherwise gleaming capital well accustomed to accommodating forces of nature.

It is playing host to another one right now, in the shape of a striker capable of making the world’s best defenders feel as helpless as Qatar’s street cleaners.

Although Robert Lewandowski spends most days closeted in the team hotel, he is a ubiquitous presence here. Once darkness falls, and it descends early in the Gulf at this time of year, giant images of the Poland captain and record goalscorer illuminate the sides of skyscrapers lining the city’s Corniche.

Qatar: beyond the football

This is a World Cup like no other. For the last 12 years the Guardian has been reporting on the issues surrounding Qatar 2022, from corruption and human rights abuses to the treatment of migrant workers and discriminatory laws. The best of our journalism is gathered on our dedicated Qatar: Beyond the Football home page for those who want to go deeper into the issues beyond the pitch.

Guardian reporting goes far beyond what happens on the pitch. Support our investigative journalism today.

Thank you for your feedback.

Up in the skies above the Arabian Sea countless stacked Qatar Airways flights circle as they queue to land at Hamad airport. Before takeoff passengers may have been slightly surprised to watch Lewandowski starring in a football-themed safety video.

Whereas his fellow part-time actor, Brazil’s Neymar, is merely seen escorting business-class passengers to their seats, the 34-year-old demonstrates how to pull on a life jacket in the event of an unscheduled landing on water.

Given that responsibility and Lewandowski are no strangers, it seems appropriate casting. “Playing for Poland definitely carries massive pressure,” agrees a striker hoping to guide his country to victory against Mexico in their opening group game on Tuesday. “I’m acutely conscious of the responsibility of meeting our fans’ expectations. They grow with every goal. No matter who we’re playing and what challenges we face, everyone expects me to score – but it’s not always easy.” 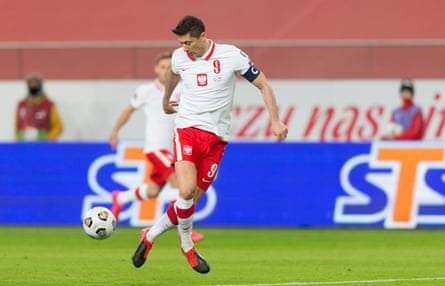 Lewandowski carries the expectations of a nation on his shoulders.

He will be shouldering the hopes of, among others, half the clientele of L’Autre, a Polish-Mexican restaurant in London’s Mayfair who know a win would appreciably enhance Czeslaw Michniewicz’s team’s chances of escaping the tournament’s group stage for the first time in 36 years. An evocative photograph of Argentina 1978 hangs proudly on L’Autre’s wall, depicting the scenes when the two countries last met at a World Cup and Poland won 3-1.

Given Lewandowski’s age, a repeat could offer him not merely a ticket out of a group also featuring Argentina and Saudi Arabia but an extended last hurrah on the global stage. “I don’t think this will be my last World Cup though,” says a player clearly minded to rage against the dying of the light. “I want to play in the next one too.”

Given that “Lewangoalski” has scored 18 times in 19 appearance for Barcelona this season and remains feted in Germany – where he played under Jürgen Klopp at Borussia Dortmund and Pep Guardiola at Bayern Munich – it would be unwise to doubt him. Both coaches admired the work ethic of a 6ft 1in forward who did not finish growing until he was 20 and compensated for this late physical development by not only becoming two-footed but expert in the air.

Such dedication paid off handsomely, helping him to 76 goals in 134 Poland appearances and a quintet of coronations as Bundesliga player of the year. Lewandowski’s place in the firmament of the world’s greatest centre-forwards is assured thanks to more than 500 career goals, but something significant is missing from an otherwise near-perfect CV.

Despite that compelling blend of superior movement, stellar technique and sheer power, he is still to score at a World Cup. In mitigation, Poland’s failure to qualify in 2010 and 2014 dictate he has participated in the group stage of only one finals – Russia 2018.

“Russia was one of the biggest disappointments of my career, mostly because we didn’t create any opportunities,” he says. “I didn’t have any chances and that still hurts. That was a f…