Richardson fails to make 100 final at the U.S. championships 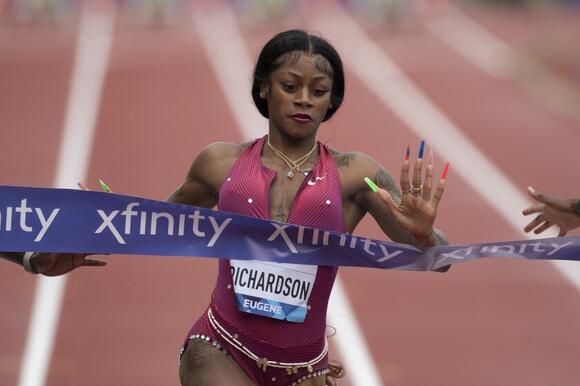 Sprinter Sha’Carri Richardson appeared to have both her speed and swagger back for the U.S. track and field championships but she had a disappointing result Thursday night in her signature event.

Despite a few promising races heading into the national championships, Richardson failed to advance out of the first round of the 100 meters. She finished fifth in her heat and did not speak to reporters.

She is also entered in the 200 at the Hayward Field meet, so her hopes of making the U.S. team for the world championships next month were still alive — albiet dimmer. She must finish in the top three to make the team for the sport’s biggest event outside of the Olympics.

Richardson is known for flashy track suits, fingernail extensions and ever-changing hair colors, as well as a brash and confident personality.

“Don’t let the media, don’t let people, don’t let a company, try to stop you from shining, because you sunshine,” Richardson said as cheering young fans called her name at a recent race in New York. “We are the light.”

Richardson garnered attention last summer when she won the 100 at the Olympic trails, which determined the team for Tokyo. But her title was stripped after she tested positive shortly after the race.

She was handed a 30-day suspension that kept her out of the event in Tokyo, and she was also left off the U.S. team as part of the relay pool, although her suspension would’ve been completed by the time of the 400 relay.

She acknowledged the mistake in an interview with the “Today” show after her suspension. She said she used marijuana as a way of coping with her mother’s recent death. But on Twitter this week she lamented the interview: “I wish I never did this. I wish I had the choice when it was time for me to tell my story.”

A few weeks after missing out on racing at the Olympics, Richardson finished last in the 100 at the Prefontaine Classic. She faced criticism after that August race from some of the more traditional corners of the sport that she was all talk and no substance.

But at this year’s Pre, as it is known, the 22-year-old Texan finished second to Olympic gold medalist Elaine Thompson-Herah of Jamaica in the 100 , running in a solid 10.92 seconds.

This month at the inaugural NYC Grand Prix, Richardson won the 200 in 22.38, and came in second in the 100 in 10.85, a season-best. And she did it in style, with a unique red fishnet track suit and rhinestones dotting her face.

“I feel phenomenal,” she said afterward.

She said her pre-race hype music was Drake’s “No Friends in the Industry.” The lyrics even have an ode to her: “And I’m like Sha’Carri, smoke ’em on and off the track.”

Richardson wasn’t the only attraction at the national championships, which run through Sunday at the stadium on the University of Oregon campus. The world championships will also be held at Hayward.

Ryan Crouser is looking to surpass his own world record in the shot put, set at Hayward last year at the Olympic trials.

Allyson Felix, the most decorated female track athlete in Olympic history, is set to run in the 400 with a shot at making one more world team before her retirement.