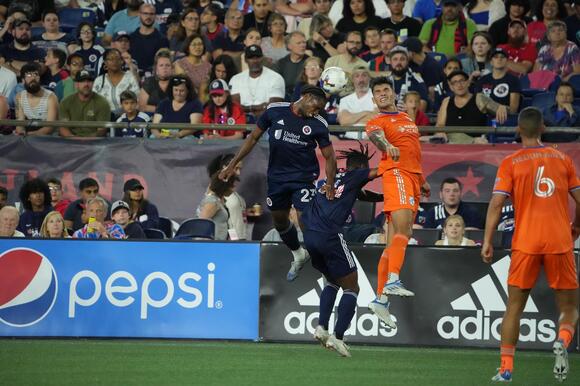 FOXBOROUGH ( NE Revolution ) – The New England Revolution (6-5-7; 25 pts.) played to a 2-2 draw with FC Cincinnati (7-7-4, 25 pts.) on Sunday night at Gillette Stadium behind goals from Dylan Borrero and Gustavo Bou. With the result, New England extended its unbeaten streak to 10 games in MLS play, the longest streak in MLS this season and tied for the third longest undefeated stretch in club history.

Borrero, making his fifth consecutive start, put the Revolution ahead in the 30th minute as the Colombian fired a left-footed shot into the far corner off a feed from Sebastian Lletget. Lletget, who had missed the last two games with an injury, picked up his fourth assist of the season on the play.

Cincinnati equalized 11 minutes later on a Henry Kessler own goal. Kessler made his return to the starting lineup for the first time since May 15 at Atlanta, playing 45 minutes on the night before being withdrawn at halftime for Jon Bell in a planned substitution.

In the second half, Emmanuel Boateng entered for an injured Borrero and yet again made an impact off the bench. The Ghanaian midfielder provided the cross on Gustavo Bou’s fourth goal of the season, a glancing header to the back post. DeJuan Jones was credited with a second assist on the play – his fourth helper of the campaign.

Cincinnati nearly equalized in the 69th minute but was denied by a double save from Revolution goalkeeper Djordje Petrović. The Serbian saved the first shot, which deflected off defender Brandon Bye, before stopping a point-blank effort on the rebound to preserve the lead. Cincinnati’s persistence paid off as the visitors capitalized on Revolution giveaway in the 73rd minute, leading t…