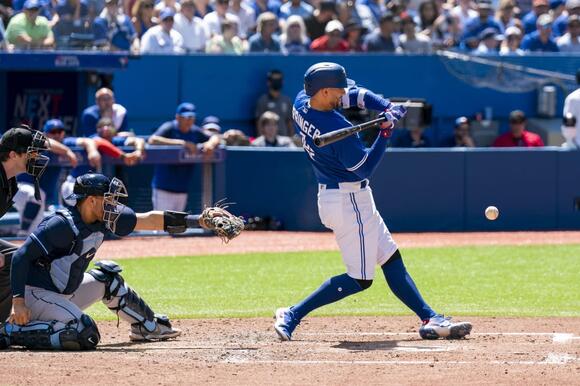 The Jays couldn’t connect with runners in scoring position in Sunday’s series finale loss to the Rays.

At the start of the season, the Blue Jays couldn’t hit with runners in scoring position. That phase eventually passed.

Now, Toronto’s lack of pitching depth is in question—Saturday’s doubleheader sweep put that weakness on full display. In Sunday’s 7-3 loss to the Rays, the Blue Jays’ past and present troubles twisted into nine dreadful innings at Rogers Centre.

The contest began with some juicy chances. The Jays loaded the bases in the first inning but hit into a double play before scoring any runs. Toronto then stranded Raimel Tapia’s leadoff double in the second inning.

The scoreless trend was broken in the third inning when Vladimir Guerrero Jr. cracked a blistering groundball single past a drawn-in infield to plate George Springer. For a moment, there was promise. But that wound up being Toronto’s last chance for meaningful runs.

The fourth inning most accurately represented the Jays’ stunted effort. With two runners on already, Toronto got handed a gift. Rays starter Shane Baz fielded a check-swing ground ball from George Springer and made a poor decision. Instead of taking the easy out at first, Baz gunned to second, where Cavan Biggio slid in safely, and the return throw to first was also late.

It wound up being a harmless play. Bo Bichette popped out to short, and Guerrero bounced a ball up the middle for an easy inning-ending force out. The Blue Jays tanked any steam they had by not capitalizing on any of those four straight opportune moments, as the club left a whopping 29 runners on base, including the bases loaded in the ninth.

A late home run spoiled a decent day on the mound for Ross Stripling, who pitched a little better than his four runs (three earned) through 4.2 innings suggested. Once Stripling left, Tampa Bay teed off on Trent Thornton for two more homers. Those added runs squashed any notion of a Blue Jays comeback.

“Those ones stick with you,” Stripling said. “When you’re one pitch away from a good outing, giving the team a chance to win, and you can’t finish it. Good starting pitchers know when to keep the pedal down, keep the gas on, and finish an outing. [I] wasn’t able to do that.”