Football fans must keep their shirts on and not be “visibly under the influence of alcohol” at World Cup stadiums in Qatar, organisers have said in a prepared code of conduct for the tournament.

Fifa has prepared a “stadium code of conduct” that applies to all 64 matches in the Gulf state.

A section advises ticket holders about their behaviour at the stadium and runs through a list of things they must not do, which includes the following:

Fans must not “remove items of clothing or otherwise remain in a state of undress” – including being shirtless.

They must also not “reveal intimate body parts”.

The guidance adds: “For the avoidance of doubt, body tattoos and body paint do not constitute clothing.”

The UK Foreign Office advises visitors to Qatar to “dress modestly” in public. Those watching matches must not “be visibly under the influence of alcohol, narcotics or any narcotic substance”.

The Foreign Office warns it is an offence to drink alcohol or be drunk in public, with a prison sentence of up to six months or a fine among the punishments.

Two days before the tournament started, alcohol has been banned from being sold at stadiums – though it will be available for corporate spectators.

Qatar had originally ordered Budweiser stands to be less prominent, but now alcohol won’t be sold at all throughout the tournament. 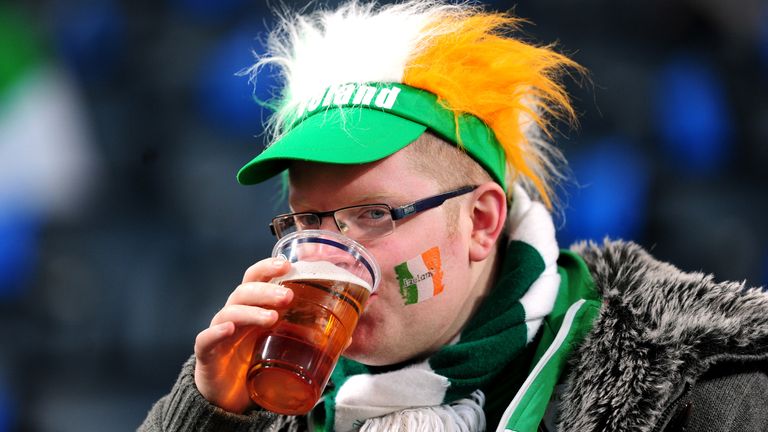 Items banned from stadiums include “bottles, cups, jars, cans or any other form of closed or capped receptacle that may be thrown or cause injury”.

Food of any kind is not allowed to be brought in – unless it is for babies or if it is medically required.

With temperatures in Doha forecast to reach up to 30C (86F) in the daytime, fans are expected to be directed to kiosks in the ground for food, water and other non-alcoholic drinks. This inflatable kangaroo in the stands in 2018 would not be allowed in Qatar. Pic: AP

It is also bad news for fans of “inflatable balls” and “other inflated or inflatable items, such as balloons” as they are also banned.

Any hopes of a ticker-tape welcome to the players involving loo rolls or other materials look doomed as “significant quantities of paper or any rolls of paper” are a no-no.

A later section stresses any materials of a “political, offensive and/or discriminatory nature, containing wording, symbols or any other attributes aimed at discrimination of any kind” are banned.

Fans have been blowing horns in Doha in the build-up to the tournament, but vuvuzelas are banned in the stadiums.

The plastic horns were a familiar sound throughout the 2010 World Cup in South Africa, although their constant tooting by fans divided opinion, particularly for those watching on television.

Read more:
Joe Lycett shreds £10k over World Cup
How will drunk fans be dealt with?
The footba…