Police search for suspect who stabbed nurse at LA hospital 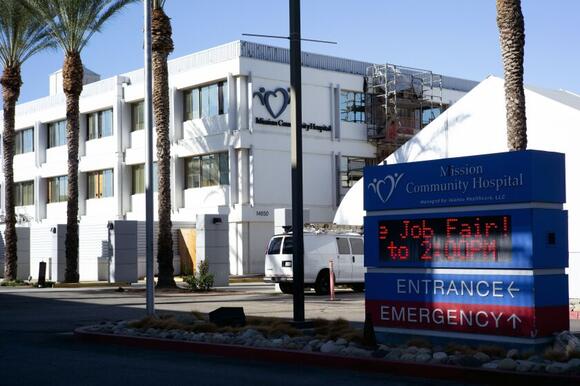 Police searched Tuesday for a man suspected of stabbing a nurse at a Los Angeles hospital in an unprovoked attack, prompting a lockdown of the facility Monday evening.

The employee, a 49-year-old man, was stabbed in the neck and the right hand and was in critical but stable condition Tuesday morning, police said.

Officers responded shortly after 6:30 p.m. following reports of an assault by a man with a knife at Mission Community Hospital in the Panorama City neighborhood of the San Fernando Valley, said Officer Annie Hernandez with the LA police department.

“The victim was inside the lobby area when he was approached by the suspect,” police said in a statement. “The suspect stabbed the victim and fled the location on foot.”

The nurse was coming into work for an overnight shift when the stranger attacked him without saying a word, investigators told KTTV-TV.

The hospital was briefly locked down as police conducted a search.

Police said the suspect ran from the scene. Pol…