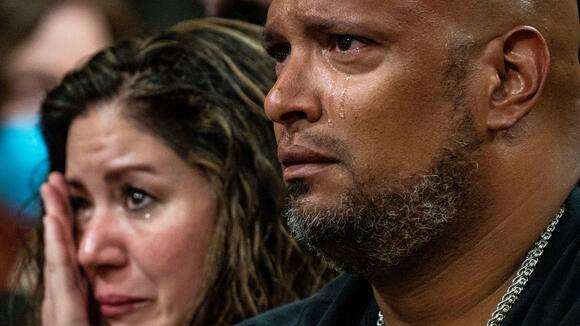 The longtime partner of the late U.S. Capitol Police officer Brian Sicknick has lashed former President Donald Trump as a “selfish bastard” who exposed police to a dangerous mob during last year’s insurrection.

Trump “orchestrated this entire thing,” said Sandra Garza, who was with Sicknick for 11 years. (Both were once Trump supporters.) He was trying to “overthrow the government so that he could stay in power,” she told WUSA Channel 9 TV in Washington, D.C., in an interview Sunday.

Sicknick, 42, suffered two strokes the day after he was reportedly sprayed with bear mace and grappled with Trump supporters breaching the Capitol. Medical authorities said he died of natural causes but noted that “all that transpired” at the Capitol “played a role in his condition.”

Garza said she was appalled by the damning televised testimony before the House Jan. 6 panel against Trump last week by Cassidy Hutchinson, assistant to Trump’s White House chief of staff Mark Meadows.

Among her most damning revelations, Hutchinson testified that Trump wanted to drop security screening for his supporters, who were known to be carrying weapons, and allow them to march to the Capitol on Jan. 6, 2021. “They’re not here to hurt me,” Hutchinson quoted Trump as saying.

“That selfish bastard. That is very upsetting,” Garza said. “My mouth dropped, my jaw dropped,” as she listened to the testimony, Garza recounted.

“It shouldn’t be shocking by now. But it still is unbelievable that he was the president of the United States at the time, and made an order like that.”

She noted that Trump “didn’t call in any reinforcements. He didn’t want the riot to stop. Actually, he orchestrated this entire thing. He was actually trying to, you know, overthrow the government so that he could stay in power.”

That’s “when it really hit me,” she told WUS…