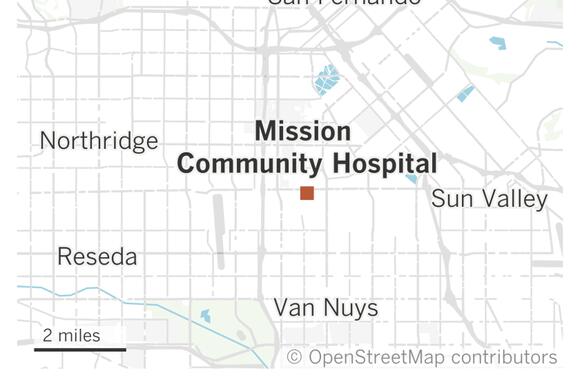 A man suspected of stabbing a Panorama City hospital employee was at large Monday evening, according to authorities.

Officers were called at 6:41 p.m. to a report of an assault with a deadly weapon by a man wielding a knife, said Officer Annie Hernandez, a Los Angeles Police Department spokesperson. Units responded to Mission Community Hospital in the 14800 block of Roscoe Boulevard.

They found one male victim who’d been stabbed, Hernandez said.

Craig Garner, a hospital spokesperson, later identified the victim as a hospital employee and said the stabbing occurred somewhere outside the hospital.

“The employee was transferred in stable condition to another facility,” Garner said.

Police remained on the scene Monday night after conducting a search to ensure hospital safety, he said. Hospital officials will continue to monitor the injured employee’s condition.

Hospital officials did not know whether the assailant and employee knew each other, or whether the attack was random, Garner said.

The suspect was described as a Latino male, possibly 40 to 50 years old; 5 feet, 7 inches tall, about 140 pounds; and wearing a hoodie, shirt, hat and backpack, all in black, Hernandez said.