Owner of stolen dog grateful to have him returned 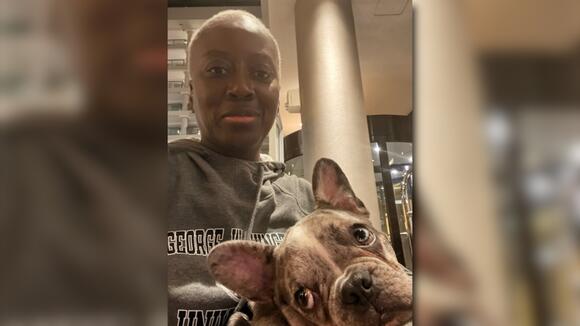 WASHINGTON (DC News Now) — A six month old bulldog named Hugo has been reunited with his owner after being stolen from a D.C. hotel room on Friday.

The suspect is still on the loose.

It happened at the Embassy Suites Hotel at the corner of 22nd and N streets Northwest around 6 p.m. Friday and then suddenly returned midnight on Saturday.

Melissa Phillips from Brooklyn, NY, was in town over the weekend taking classes at George Washington University. She brought her two dogs with her to the hotel and went to class early Friday morning.

“The dog was in the room. I came back and I immediately noticed that he wasn’t coming up to me,” Phillips said.

“They didn’t take the other dog. The other dog has a little bit of a handicap. She has hip problems and she’s Cavalier,” Phillips said.

She had supervisor check with housekeeping.

“One of the ones that she reached sad that there were two dogs in the room,” Phillips said.

It’s not the first time a French Bulldog was stolen in the District. In April, one year old Bruno was taken in an armed robbery in Northwest. He was found dead in Prince George’s County last month.

Luckily for Phillips, Saturday at midnight “The front desk was calling me to say that stranger had walked up to the desk and handed them the dog and saying they know the dog belongs here. Yeah. And he left,” Phillips said.

Police are looking for a man seen in surveillance video with Hugo under his arm.

Phillips told the hotel operations manager, “Anything’s possible but my dog has not left the room and the only people who know him, who’ve seen him are people that work for the hotel,” she said.

While detectives investigate she has this messa…