Outright Lying: Justice Alito Getting Burned at Stake as SCOTUS... 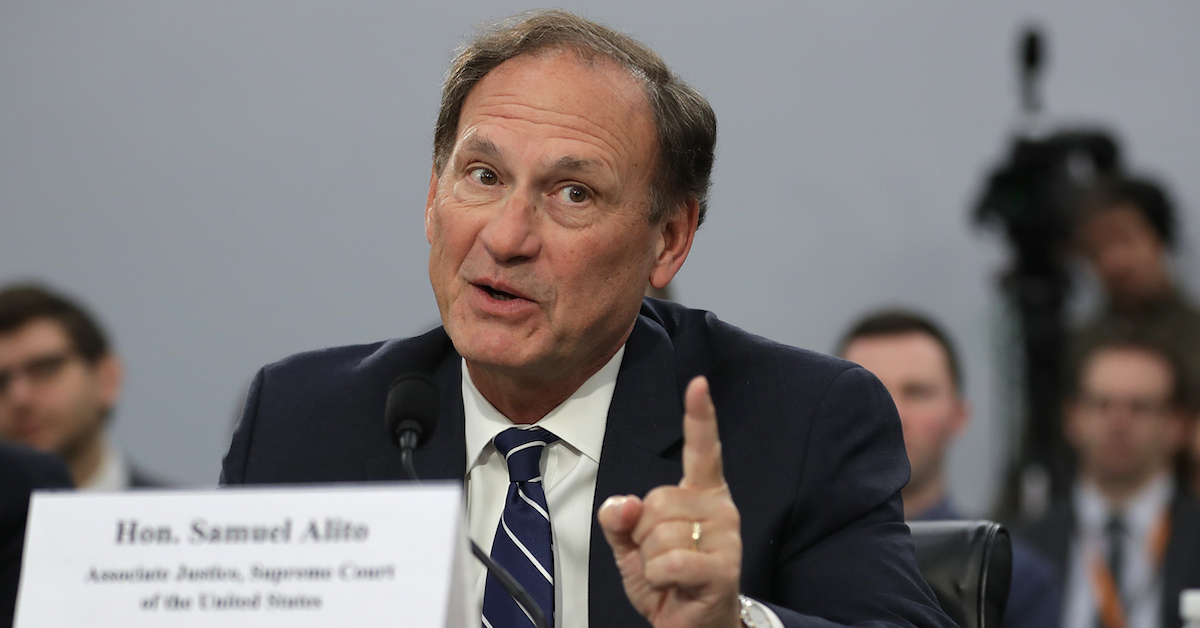 Supreme Court Justice Samuel Alito denied allegations he was behind leaking a 2014 Supreme Court ruling, which has many critics now branding him as the one who leaked the decision to overturn Roe v. Wade.

Former anti-abortion activist Rev. Rob Schenck claimed through interviews with the New York Times and a letter sent to Chief Justice John Roberts that he was told the outcome of the Burwell v. Hobby Lobby weeks before it became public in June 2014.

According to the report by Jodi Kantor and Jo Becker, Schenck prepared a public relations campaign ahead of the ruling and he even tipped off the president of Hobby Lobby, the company that would win the case.

According to the Times:

In early June 2014, an Ohio couple who were Mr. Schenck’s star donors shared a meal with Justice Alito and his wife, Martha-Ann. A day later, Gayle Wright, one of the pair, contacted Mr. Schenck, according to an email reviewed by The Times. “Rob, if you want some interesting news please call. No emails,” she wrote.

Mr. Schenck said Mrs. Wright told him that the decision would be favorable to Hobby Lobby, and that Justice Alito had written the majority opinion. Three weeks later, that’s exactly what happened. The court ruled, in a 5-4 vote, that requiring family-owned corporations to pay for insurance covering contraception violated their religious freedoms.

As Law & Crime’s Aaron Keller notes, Alito vehemently denied the accusation that he leaked a ruling as “completely false” in a statement.

Critics weren’t buying it as Twitter became full to the brim with critics and numerous liberal pundits expressing shock at the revelation, and some even calling for Alito to be removed from the bench.

“This is really really shocking stuff. Also seems like someone is definitely outright lying and one of the people who may be just outright lying is Alito,” MSNBC’s Chris Hayes tweeted in reaction.

This is really really shocking stuff. Also seems like someone is definitely outright lying and one of the people who may be just outright lying is Alito.https://t.co/eOtph5xbQJ

“Alito is a disgrace to this nation and as dangerous as any terrorist. He must be forced off the Court,” Keith Olbermann wrote.

The Supreme Court Leaker – for Dobbs and Hobby Lobby – was Samuel Alito.

Alito is a disgrace to this nation and as dangerous as any terrorist.

He must be forced off the Court. https://t.co/rZIGJ4IMTc

The Supreme Court has shown it cannot investigate itself. The Senate Judiciary Committee must open an investigation immediately into the leaks and evidence of conflicts of interest among multiple Justices.

There was no shortage of people now completely convinced Alito was the Dobbs leaker.

oh wow i wonder who the dobbs leaker could be https://t.co/MFUBAQP3k8

This story is stunning.

In short: Alito himself leaked the Dobbs decision, and not only that, he’s leaked his own opinions before, to right-wing litigants, so they could wine and dine other justices, and donate to their causes, to secure their vote. https://t.co/0LobfuibNu

How anyone could read this exposé of Sam Alito’s leak of the Hobby Lobby ruling in 2014 and not (1) yell out “This is crazy!” (2) conclude that Alito likely leaked the Dobbs opinion last spring, and (3) call for Congress to investigate this is beyond me. https://t.co/jt6h5GYhRs

I’m starting to worry that Samuel Alito may be an untrustworthy and immoral person.

So we all agree that Alito also leaked the Dobbs opinion right https://t.co/opvDomr5UX

Alito is now denying to the Times that he (or his wife) is the Supreme Court leaker.

So what would Roberts do if his investigation proves Alito is the leaker?

We don’t know who leaked the Supreme Court opinions to conservative groups, but one justice certainly doth protest his own …