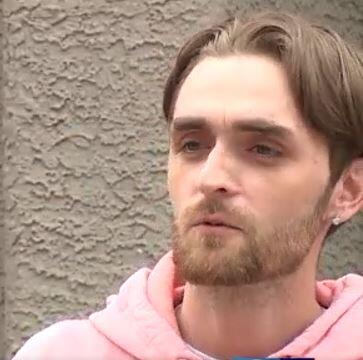 LAS VEGAS (KLAS) — A man who was shot in the head outside his west valley apartment spoke with 8 News Now on Wednesday and said he’s lucky to be alive.

Austin Kulp said he is still recovering weeks after the shooting.

“They said there’s still some birdshot and concrete in my head,” Kulp explained.

It all happened on June 13, outside the door of his apartment near Durango Drive and Sahara Avenue, when he said his neighbor, who police have identified as 49-year-old Tyrone Blanks, approached him with an AR-15 style rifle.

“I turned around, went up the stairs,” Kulp recalled. “And that’s when he shot.”

The bullet grazed his skull and left a hole in a nearby stucco wall. Blanks was later arrested after an hours-long standoff with the police.

Jordan Millhoff, Austin’s sister, told 8 News Now she was shocked when she first heard the news while she was at work.

“I looked down at my phone,” Millhoff said. “And all I see was that my brother was shot in the back of the head.”

They’d reportedly had run-ins with Blanks before, but neither expected things to escalate to this point.
“Even if it’s not a big deal,” Millhoff said. “It can turn into something like this.”

Now, as they try to get back on their feet, Austin and Jordan are forced to face a mountain of medical bills.

They also told 8 News Now they are being evicted from their apartment.

It’s a situation that’s incredibly difficult, to say the least, but no matter what happens, Kulp said he is grateful to still be here.

An arrest report states that police found a black, semi-automatic shotgun under his bed while searching his apartmen…