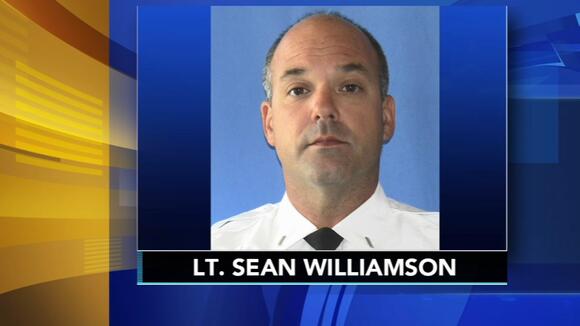 Philadelphia officials have identified the firefighter killed after being trapped in a building that caught fire in Philadelphia and collapsed early Saturday.

Williamson was most recently assigned to Ladder 18 in Hunting Park and leaves behind his mother and son.

“It’s going to be a rough few weeks coming up,” 1st Deputy Fire Commissioner Craig Murphy said at a media briefing around 8 a.m.

Williamson and other fire crew members were called to the 300 block of W. Indiana Avenue in the city’s Fairhill section.

The blaze broke out around 2 a.m. at a three-story restaurant and residential building. The fire had been put out, but then the building collapsed at 3:24 a.m.

Officials say a 2nd-alarm was declared after the collapse occurred.

The collapse was eventually placed under control at 7:12 a.m.

Four other firefighters and an inspector with the city’s Department of Licenses and Inspections were also trapped at the time of the collapse. One firefighter jumped from the second story of the rubble, Murphy said.

The others were pulled out at various times.

The names of the injured members during the emergency response were:

One firefighter has died after being trapped in a building that caught fire in Philadelphia and then collapsed Saturday morning, fire officials said.

“You can’t predict this,” Murphy told reporters at a news conference. “This was just a catastrophic accident that (has) really hurt our department.”

Murphy said the building had been affected by the fire, but it was unclear what caused it to come down.

“The Philadelphia Fire Department is grieving with the family, friends, and community for all those affected by this tragedy,” said Philadelphia Fire Commissioner Adam K. Thiel in a statement. “It is not possible to express in words what we feel at this time.”

The Philadelphia Fire Department’s Fire Marshal’s Office is investigating the cause of the fire with assistance from the ATF.