Off-duty CPD officer shot during ‘road rage’ incident had been... 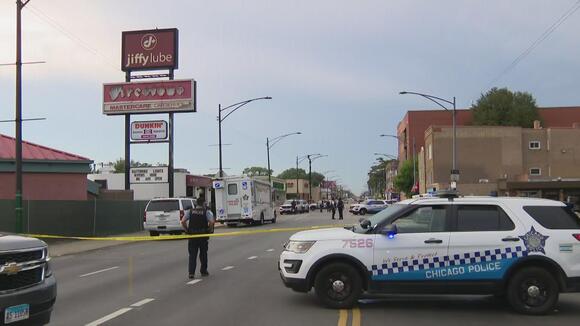 CHICAGO (CBS) — An off-duty police officer who was shot in the face during a road rage incident in Irving Park on Tuesday had been relieved of her police powers days earlier, and sources said it was because drugs had been found in her system.

Meantime, a hunt for the shooter continues.

Late Tuesday, the hunt for the shooter continued Wednesday afternoon.

The incident took place around 3:10 p.m. Tuesday near the intersection of Addison Street and Elston Avenue, according to CPD Supt. David Brown.

Chicago police have said the 27-year-old woman was going north on the 3600 block of North Elston Avenue just after 3 p.m. Tuesday, when a man in an SUV in front of her stopped abruptly, backed into her vehicle, then opened fire.

The off-duty officer was shot in the face. She was taken to a hospital. Police have said her injuries were not life-threatening.  The incident was captured on surveillance cameras, at two businesses.

Several police sources said the woman’s car was rammed repeatedly by the offender as she drove through the community before the shooting.

The officer was traveling northwest on Elston Avenue when a vehicle traveling in front of her abruptly stopped. The offender then produced a firearm, firing shots from the vehicle, which police said was a black sport-utility vehicle — possibly a GMC Yukon with chrome rims.

The suspect fled, but later, police were attempting to stop a dark-colored vehicle in the 5000 block of West Lawrence Avenue — in Jefferson Park north and west of the original scene. During the encounter, the suspect vehicle struck two CPD squad cars and one officer fired their weapon.

The CPD said no individuals were struck in that incident, and no injuries were reported. The suspect vehicle then fled in the dark-colored vehicle and escaped.

Northeastern Illinois University police later found the unoccupied vehicle in the 5800 block of North Drake Avenue, just east of Peterson Park and North Park Village, and about three miles north of the shooting that started it all.