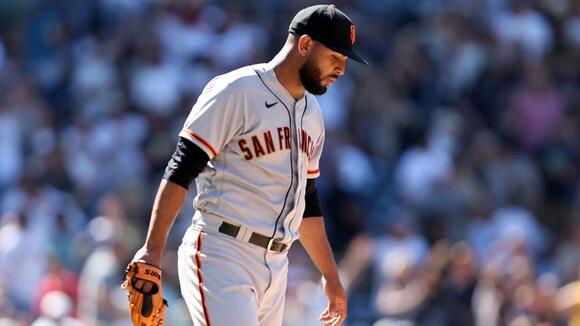 SAN DIEGO — Brandon Drury hit a go-ahead, three-run home run in the sixth and Austin Nola’s two-run homer capped a seven-run rally — all with two outs — that carried the San Diego Padres to a wild 13-7 win against the San Francisco Giants on Wednesday.

The Padres fell behind 4-0, surged ahead 6-4 after Manny Machado’s two-run double ignited a six-run rally in the third and then fell behind 7-6 in the sixth. But the Padres came through with another big rally in the bottom of the sixth, the second time they batted around in the game.

Drury lined a 1-2 pitch from Yunior Marte (0-1) into the seats in left field with two outs to make it 9-7. Machado and Josh Bell were aboard on singles. The Padres added on with Kim Ha-seong’s RBI double, an error and then Nola’s shot into a balcony on the Western Metal Supply Co. Building in the left field corner. It was Drury’s 22nd and Nola’s third.

Machado and Jake Cronenworth had three hits apiece and Drury drove in four runs. The Padres scored 20 runs in winning two straight games after suffering two straight shutouts at the end of a five-game losing streak. They went 26 scoreless innings from the fourth inning Saturday against the Los Angeles Dodgers until Juan Soto hit his first homer with the Padres in the fourth inning Tuesday night. The Padres won that game 7-4 on Machado’s three-run walk-off homer.

San Diego now heads to Washington, where Soto and Josh Bell will face their old team. They were acquired from the Nationals in a blockbuster trade on Aug. 2.

For the third time in franchise history, they had four hits with the bases loaded. Besides Machado’s double, the Padres got bases-loaded singles from Drury, Cronenworth and Trent Grisham. Another run scored on Nola’s fielder’s choice.

The Padres needed the big rally after the Giants scored three runs in the third to take a 4-0 lead. Two of those runs came in when Soto, the right fielder, misplayed Austin Slater’s single into three bases, allowing two runs to score. Wilmer Flores then singled in Slater.