NASA’s Orion spacecraft makes its closest approach to the moon... 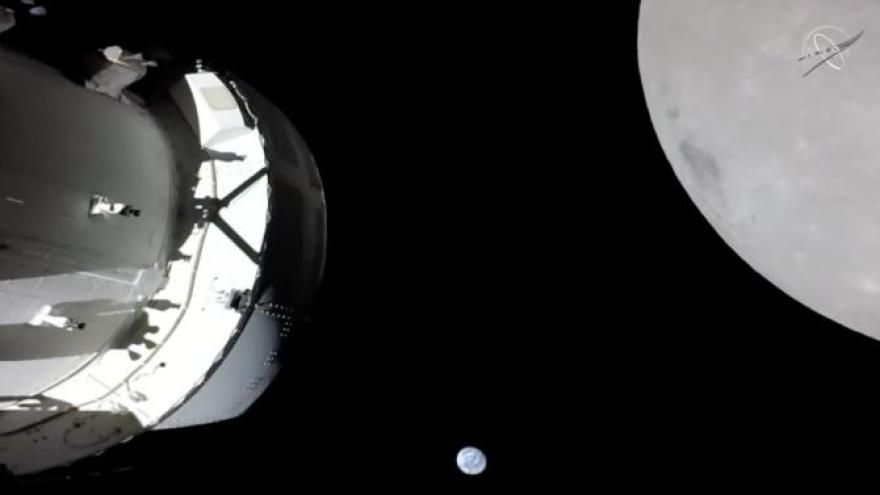 NASA’s Orion spacecraft approaches its closest flyby of the moon during NASA’s Artemis I mission.

(CNN) — NASA’s Orion capsule passed about 80 miles (130 kilometers) above the lunar surface early Monday, a monumental achievement in the mission designed to test the US space agency’s ability to one day return astronauts to the moon.

After its lunar flyby, Orion — which is designed to fly astronauts but is carrying only inanimate, scientific payloads for its first mission — is expected to travel more than 40,000 miles beyond the far side of the moon, the furthest a spacecraft intended to carry humans has ever traveled.

It’s all part of NASA’s Artemis program, which aims to eventually establish a lunar outpost that can permanently host astronauts for the first time in history, in the hopes of one day paving a route to Mars.

The Artemis I mission launched last Wednesday morning, when NASA’s beleaguered and long-delayed Space Launch System, or SLS, rocket vaulted the Orion capsule to space, cementing the rocket as the most powerful operational launch vehicle ever built. The SLS rocket’s thrust exceeded that of the Saturn V rocket, which powered the 20th-century moon landings, by 15%.

Now, Orion is on a 25-and-a-half day journey to circumnavigate the moon.

Monday’s flyby of the lunar surface was the closest that the Orion capsule will be to the moon before it enters a “distant retrograde orbit,” meaning it will circle the moon in the opposite direction from which the moon travels around Earth.

After lapping the moon, the Orion capsule is expected to turn back toward Earth and make a gentle, splashdown landing in the Pacific Ocean on December 11.

The target landing site is just off the coast of San Diego, and NASA recovery ships will be waiting nearby to haul the spacecraft to safety, a practice run for future missions that include astronauts. And this time they’ll also be looking to recover some scientific instruments on board that have collected data to help NASA understand how astronauts might be affected by future flights.

Sarafin told reporters Friday that NASA has had to troubleshoot more than a dozen “funnies” with the Orion capsule, but, overall the spacecraft is performing “really well.”

One problem that cropped up was related to Orion’s star tracker, a system that uses a map of the cosmos to tell engineers on the ground how the spacecraft is oriented. Some data readings weren’t coming back as expected, but NASA officials chalked that up to a learning curve that comes with flying a new spacecraft.

“We worked through that, and there was some great leadership by the Orion team,” Sarafin said.

“We had an understanding of the system headed into the mission,” he added. “We had (predictions) — whether it was how much power would we consumed or how much propellant or how hot the vehicle would be — and we’re not exactly matching that. And in most cases it is performing better.

“We’re seeing things that don’t quite match our predictions. And the team is spending the time to go through that with a fine-tooth comb to make sure that there isn’t something else there that is potentially a latent issue.”

Sarafin’s comments came before NASA made the final determination on Saturday to put the Orion spacecraft on a path to enter its distant retrograde orbit around the moon.