More than 1m march in London for biggest ever Pride... 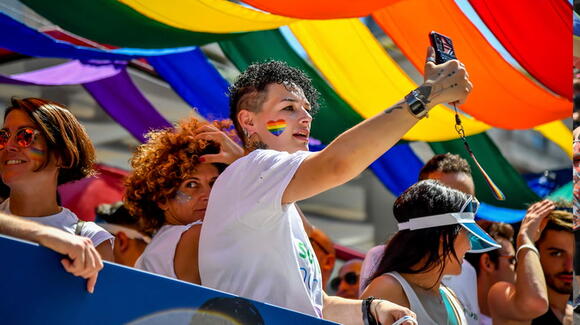 London was awash with colour as hundreds of thousands of people marched through the streets of the capital in the “biggest ever” Pride as the parade returned for the first time since the pandemic to mark its 50th anniversary.

City mayor Sadiq Khan ’s office saidmore than one million revellers, many in rainbow colours and wearing face paint, glitter, jewels and sequins, gathered on Saturday for what organisers declared was the “biggest and most inclusive event in history”.

Olympian Dame Kelly Holmes and singer Emeli Sande , who both recently came out as gay, were among the famous faces who shared their excitement at taking part.

Dame Kelly, the double gold medal winner, told crowds she was “never going to live behind that curtain again” after making her sexuality public last month at the age of 52

Pride organisers said more than 30,000 people had applied to join the parade to celebrate progress made in tackling inequality and the continued fight against injustice.

The main parade, led by the Gay Liberation Front, started near Hyde Park at 3pm. Floats packed the streets in the capital as people danced and sang in the summer sunshine, with activists holding placards saying “I was there in 1972” and that they are “still fighting” for global LGBT+ freedom.

A host of artists provided entertainment across four stages at the event, whose official publishing partner this year was The Independent .

Among the performers was singer Sande, who previously said she was driven to come out publicly by an urge to be “bold and honest” in everything she does.

The parade closed with a “show-stopping” performance by popstar Ava Max at Trafalgar Square.

Lesbians and Gays Support the Migrants said queer activists halted the pride for 23 minutes in protest against the presence of police at future London pride events and to highlight deaths in custody.

Earlier in the week, Pride organisers told the Metropolitan Police that uniformed officers were not welcome to take part in the main parade due to what it said was the force’s “homophobic” handling of its investigation into the serial killer Stephen Port, who murdered four young gay men in Barking.

Officers did not attend the parade and were “sensitive to the issues raised by the comminity,” London mayor Sadiq Khan said.

He was among a…