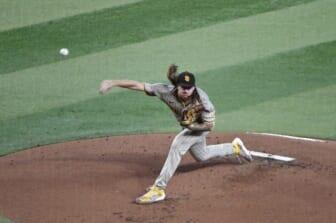 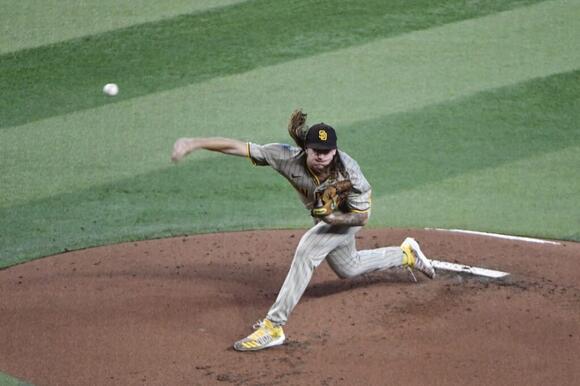 Mike Clevinger allowed one hit in six shutout innings and Jake Cronenworth snapped an 0-for-26 drought with three straight hits — driving in two runs and scoring a third — on Wednesday afternoon as the visiting San Diego Padres scored a 4-0 win over the Arizona Diamondbacks to gain a split of the two-game series in Phoenix.

The only hit off Clevinger was a lead-off single by Geraldo Perdomo in the third. Clevinger (2-0) also issued a walk and struck out six in his longest outing of the season. It marked the first time since the end of the 2020 season that Clevinger worked at least six scoreless innings in a game.

Madison Bumgarner (3-8) gave up one run on four hits and three walks with four strikeouts in five innings for the Diamondbacks to take the loss. Bumgarner has yet to win a game against the Padres in his three seasons with the Diamondbacks.

Bumgarner had held the Padres scoreless through 4 2/3 innings when Jurickson Profar drew a walk, leading to a verbal exchange between the pitcher and Profar. Austin Nola then singled sharply to center, moving Profar to second. Cronenworth then lined a RBI single to right to end the scoreless tie.

Cronenworth finished 3-for-5 with two doubles and the Padres added single runs in the sixth, seventh and ninth.

In the seventh, Cronenworth got his second straight hit, a double, with one out off Noe Ramirez and scored on Luke Voit’s single to center. In the ninth, Profar drew a leadoff walk and scored on Cronenworth’s double off the wall in straight-away center.

The Diamondbacks, who rallied from a 6-0 deficit Tuesday night to defeat the Padres 7-6, threatened in the bottom of the eighth against reliever Nick Martinez. Buddy Kennedy singled leading off the inning and moved to second when pinch-hitter Pavin Smith drew a walk. But Martinez retired the next two hitters on ground balls, stranding the runners at second and third.