Mets and Yankees get stark reminder of Astros strength

The Astros showed up in the middle of a dream New York City baseball season as a wake-up call.

They have reminded the Yankees that there will not be a cakewalk from here to the World Series. They have shown the Mets there is a weight class they still must ascend toward.

When Houston began a quirky nine-game, home-and-home phase exclusively Sinatra (“New York, New York,” for those not playing along), the Yankees had the majors’ best record and the Mets the second-best. The Astros are eight games into this challenge, and it isn’t just that they are 6-2, but the only times they trailed over 73 innings was literally when two of those games were over — Aaron Judge delivered walk-offs last Thursday and Sunday.

The Astros now have MLB’s second-best record behind the Yankees, with the two teams set to play a single, lockout-generated game Thursday in Houston. Regardless of what happens Thursday, the past eight Astros games have offered the strongest slap this season at the good baseball vibes in New York.

“I don’t think our guys were looking to measure up against anybody,” said Justin Verlander, amazingly the Astros’ staff ace again after missing most of the past two seasons following Tommy John surgery. “We know how good we are, and I don’t think that by any means are we looking to see how we stacked up.”

Verlander allowed one run in 15 innings in his past two starts against the New York clubs, including eight shutout frames in a Wednesday matinee won 2-0 by the Astros at Citi Field. 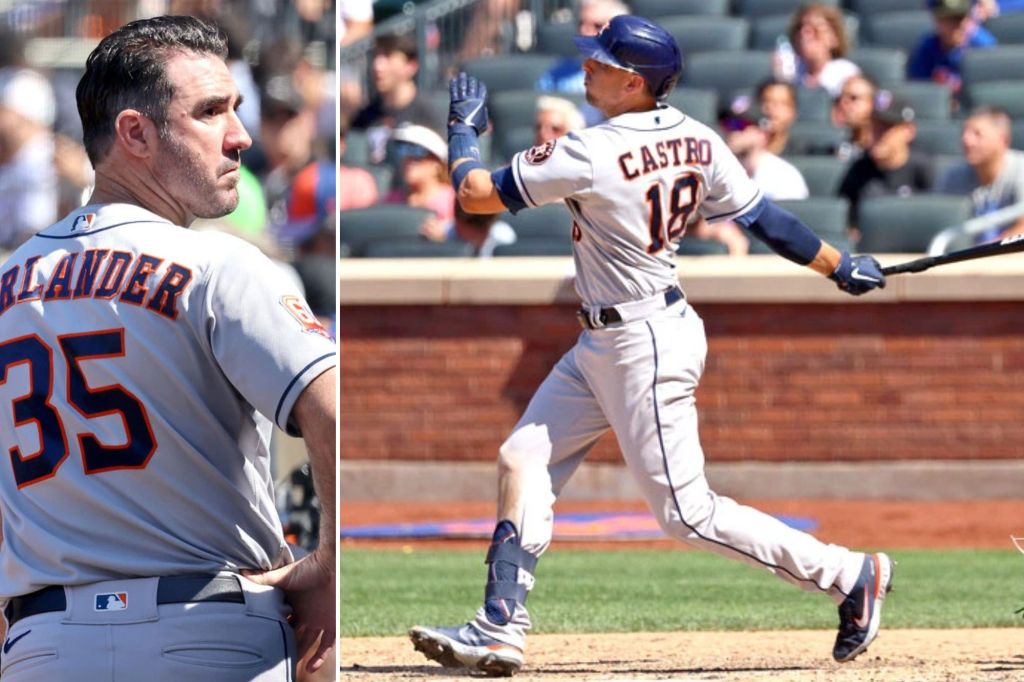 The Yankees did not trade for Verlander in August 2017 when he instead went from Detroit to Houston and was pivotal in the Astros beating the Yankees in seven ALCS games and winning their only championship (tainted, of course, by the sign-stealing scandal). The Yankees talked to him again during the past offseason in free agency, but Verlander told me last week they came in late and were never a factor.

The Mets, in theory, were hoping to have two Verlander types with Jacob deGrom and Max Scherzer. But on Wednesday, Showalter watched live as deGrom, who has yet to pitch in the majors this year, threw a 27-pitch live batting practice in Port St. Lucie. That leaves him still weeks away from helping and certain to cross a year (July 7) without appearing in a major league game due to arm maladies. The Mets opted to have Max Scherzer (oblique) make one more minor league rehab start Wednesday rather than face his former Tigers teammate, Verlander.

But it wasn’t as if Scherzer would have done better than Taijuan Walker, who has pitched superbly to somewhat help ease the loss of the co-aces. Walker delivered seven shutout innings versus Houston, aided by a Brooks Robinson/Graig Nettles kind of game at third from Luis Guillorme. With various body contortions and arm angles, Guillorme was involved in 12 outs, and the Knicks can only hope Jalen Brunson has a similar gift for creative playmaking as Guillorme, who had nine assists.

Edwin Diaz took care of the top of the Astros’ lineup in the eighth inning, and in the bottom half Houston’s 2-3 hitters, shortstop Jeremy Peña and left fielder Yordan Alvarez, collided chasing a Dom Smith pop-up. Both were down for a while, and Alvarez had to be carted off the field. Both were moving around the clubhouse after the game, though manager Dusty Baker offered no insight into their conditions.

Jason Castro entered the ninth inning with a .104 average and one RBI this season. But Houston’s catcher hit a two-run homer off of Drew Smith, and the Mets fell to 0-4 this year against Houston, being outscored 24-6. The Mets have been swept just twice this year, both in two-game series against the Astros. The Mets now have their first three-game losing streak of 2022. The only team yet t…