by postolink.com 1 month ago1 month ago
188views
78
17 shares, 78 points
DALLASBASKETBALL 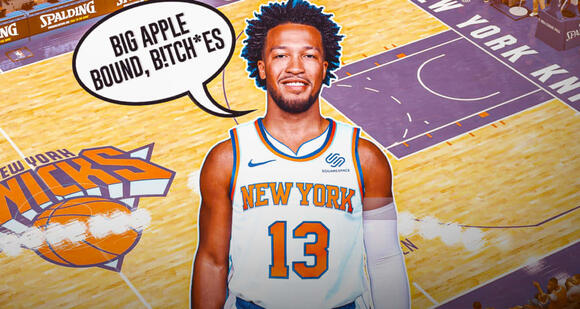 Whether you’re at the end of your coffee, your day, your week or even your rope, welcome to Whitt’s End …

* To quote Seinfeld ’s “Elaine Benes” during a light-bulb moment illuminated with both clarity and involuntary humility: “Is it possible I’m not as attractive as I think I am?”

Maybe it’s our triple-digit Summers. The dwarfing shadow cast by Jerry Jones and the Dallas Cowboys. Or perhaps we should blame the American Airlines Center’s leaky roof.

Regardless, it’s time – yet again – for Dallas to have an Elaine awakening: “The Mavs are a big-market outfit, but not a glamorous one.”

And, no, they aren’t nearly as attractive as they believe. Rinse. Repeat.

Just ask Jalen Brunson, the latest NBA marquee free agent to decline the Mavs’ invitation to make $100+ million playing basketball in Dallas. While one of the stars of last season’s run to the Western Conference Finals bolted for the New York Knicks without even entertaining a meeting with owner Mark Cuban , the Mavs are left with a defeatist déjà vu:

Not only do they annually whiff on their No. 1 free-agent targets, they have not signed a player – other than Luka Doncic – they drafted to a second contract since Josh Howard in 2003.

The Mavs will likely attempt to tamp down Thursday’s colossal failure by ridiculously claiming they weren’t allowed to make an offer (um, all last season?), with re-tread center JaVale McGee , the promise of 36-year-old Goran Dragic and cries of “tampering!” by the Knicks . It will all ring hollow, because we’ve been disappointed by these cries of “wolf” for 20+ years.

When Cuban bought the keys in 2000 he boasted that elite free agents would flock to Dallas because, in part, he was players’ owner that would both fight for them and pamper them with fluffy robes and lockers accessorized with DVD players.

Reality: Because of their free-agent failures, the Mavs won only one championship despite having one of the planet’s best 10 players (Dirk Nowitzki) for the better part of 21 years. Are they also about to waste Luka?

Said Cuban a year ago, “Players want to play with Luka. And from what I’m hearing from them … a lot.”

“Players”, that is, excluding his successful backcourt running mate.

Through the years the Mavs promised they were “keeping our powder” dry and breaking up the 2011 title roster only to exploit a looming “nuclear winter” of salary-cap opportunity. Despite all the proclamations and positioning, the biggest free-agent signing of the Cuban era is …

There have been singles – Monta Ellis, Peja Stojakovic and Vince Carter – but never the trajectory-altering grand-slam homer.

And don’t even start with the potential “connections” to Kevin Durant, Kyrie Irving, et al. At this point it’s not the free agents that are flawed, it’s us.

* The arrival of July means the end of June, and the passing of another “Pride Month” with nary an acknowledgement from the Texas Rangers . They continue the distinction of being the only Major League Baseball team to never recognize – much less celebrate – its LGBTQ fans. (Maybe they think Charley Pride bobblehead night in April counts?)

No way around it: the Rangers are one of the most closed-minded, least inclusive sports franchises in America. Their official team hashtag probably has nothing to do with shameless catering to its cherished demographic. Or does it? #StraighUpTX

* It’s not the $50,000 diamond pendant , it’s all this chirping by Micah Parsons about breaking the NFL’s single-season sack record that’s making me cringe.

We heard similar braggadocio from the 2020 NFL Defensive Rookie of the Year, Washington’s Chase Young a year ago . And look how that turned out. Young was ineffective (1.5 sacks in nine games) before getting injured (torn ACL).

I don’t believe in “football Gods”, but I do suspect opposing teams will make special effort to prevent the Cowboys’ pass-rusher from flirting with any such record.

* You’ve seen one fireworks show, you’ve seem ’em all. No really, if I showed you video of fireworks in the sky you wouldn’t be able to tell the 1982 show from the one you’re going to crane your neck to see Monday night. Fireworks – like car wheels that appear to be spinning backward when I know for sure they’re rolling forward – really eff with my mind. It looks like they’re always bursting toward me, but that can’t be true. Can it?

* Remember when Lincoln Riley becoming head coach of USC was going to return the Pac 12 to power? Two seasons from now Southern Cal and UCLA will play in the Big Ten and the West Coast’s major conference will be left piecing together scraps. I predict Texas and Oklahoma will now expedite their departure from the Big 12 to the SEC to coincide and by 2024, college football will be a two-conference sport.

* I say this as a kid who in the 1980s was mesmerized by the cutting-edge technology of “Pong”: Virtual Reality is stunning. Slapped on a headset last week and literally lost my balance and almost fell down as I “ran” from zombies. More reality than virtual.

* Feels like I say this too often but yet not enough: Considering Brunson leaving us high and dry, now do we appreciate Dirk’s unyielding loyalty to Dallas?

* Ooh, this is going to drive a lot of conservative Texans bonkers. Our state’s prettiest girl is … Asian ?

* You’re not the only one who overthinks things. Rangers’ manager Chris Woodward flipped Marcus Semien and Corey Seager in the lineup Tuesday , just to shake things up. The result: They combined for five hits, including a three-run homer by Semien in an 8-3 victory. Here’s betting Woodward’s lineup will return to “normal” when Texas visits the Mets for a series in New York this weekend.

* Speaking of my pint-sized sportswriter brain not being able to comprehend anything more complex than a box score, I’m constantly amazed by software gizmos like Waze and Shazam. The music-identifying app works almost faster than you can press the “Tap” button. (For the record, I Shazammed “Chunky” by Format B.)