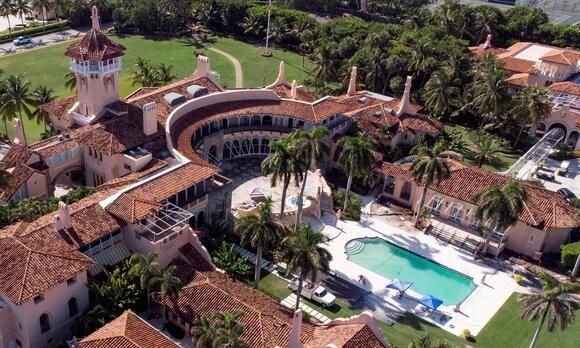 Long before FBI agents found highly classified documents close to public areas of Mar-a-Lago, the Florida resort that Donald Trump calls home, a number of other eyebrow-raising incidents have heightened concerns over the property’s security.

They range from a Chinese national carrying multiple mobile phones and computer malware making it through a Secret Service checkpoint, to a fake heiress breezing in for photographs with the former president, to diners looking over Trump’s shoulder at a laptop displaying top secret information about North Korean missile launches.

Trump branded his waterfront mansion – built in the 1920s for the cereal heiress Marjorie Merriweather Post – his “winter White House” for the duration of his single term in office.

Given Mar-a-Lago’s status as a private club, however, with open access for (predominantly unvetted) members and paying guests to almost every corner of the main buildings and nearby beach club, there’s one way in which it could never match the actual White House: security.

1 Boxes of classified documents beneath the Great Hall

April 2022: FBI agents found boxes of secret and classified documents in a basement “storage area” beneath the Great Hall, the public hub of the Mar-a-Lago resort.

2 Summit with Chinese president in front of guests

April 2017: Trump held an “international summit” with the Chinese president, Xi Jinping , in the living area of the Great Hall in full view of resort members and paying guests.

April 2019: Chinese national Yujing Zhang is detained in the lobby after passing through Secret Service security in possession of four cellphones and flash drives containing malware (malicious software designed to infiltrate computers for nefarious purposes). She was receiving a golf cart ride to the club.

February 2017: Trump discussed the North Korean missile crisis in the company of the then Japanese prime minister, Shinzo Abe, in the resort’s open-air dining room, perusing classified materials on a laptop watched by diners and waiters.

August 2022: FBI agents search Trump’s bedroom inside his private quarters at Mar-a-Lago, one of three areas targeted according to the affidavit supporting the search warrant application. It is not known what was found there.

April 2017: Trump sets up an impromptu “ situation room ” in an office in order to monitor US missile strikes on Syria. Analysts noted the insecure set-up and presence of officials with no connection to national security.