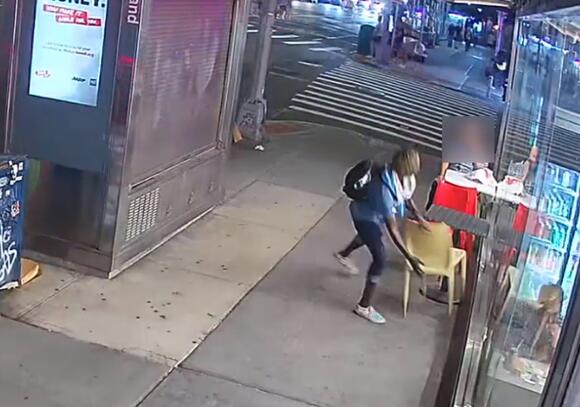 HELL’S KITCHEN, Manhattan (PIX11) – An assailant walked up to a man sitting outside a New York City restaurant and randomly threw a chair at him, breaking the victim’s arm before robbing him, police said.

The unprovoked attack – captured on surveillance video – happened outside 370 West 58th Street in Hell’s Kitchen around 10:30 p.m. on Sept. 9, according to the NYPD.

The suspect walked up to a 66-year-old man sitting at a table outside Amore Pizza Restaurant and threw a chair at him. The assailant then picked up the victim’s cellphone and ran off with it, police said.

The 66-year-old victim suffered a broken bone in his forearm, authorities said.

The assailant has not been caught. However, the NYPD released surveillance images showing the suspect.