Lorenzo Cain’s time with the Brewers is over after the...

CINCINNATI – David Stearns stood in front of a red velvet curtain in the bowels of Great American Ball Park and began rattling off his favorite memories of Lorenzo Cain’s tenure with the Milwaukee Brewers.

Unfortunately for Cain – and the Brewers – there won’t be any more on the field in the blue and yellow.

The Brewers designated the centerfielder for assignment on the date of him reaching the 10-year mark of major-league service time, an important milestone for reasons both intangible and tangible.

“Craig (Counsell, Brewers manager) and I sat down with Lo this morning,” Stearns, the Brewers president of baseball operations, said Saturday. “It’s a milestone day for Lo, to get 10 years of service in the major leagues is an incredible accomplishment. We sat down with him and had a discussion about where we are, where he is, and through that came to really a mutual understanding that it’s probably time to part ways.

More: Lorenzo Cain had an interesting night, and Eric Lauer was terrific again in beating the Braves

More: A sore knee and the emergence of Tyrone Taylor have both reduced Lorenzo Cain’s playing time for the Brewers

“Lo has been an incredible Brewer. He’s had an incredible career. I don’t know if this is the end of his career or not but if it is, he has been remarkable. And I think his contributions to our organization have really been beyond what we could have expected when we signed him.” 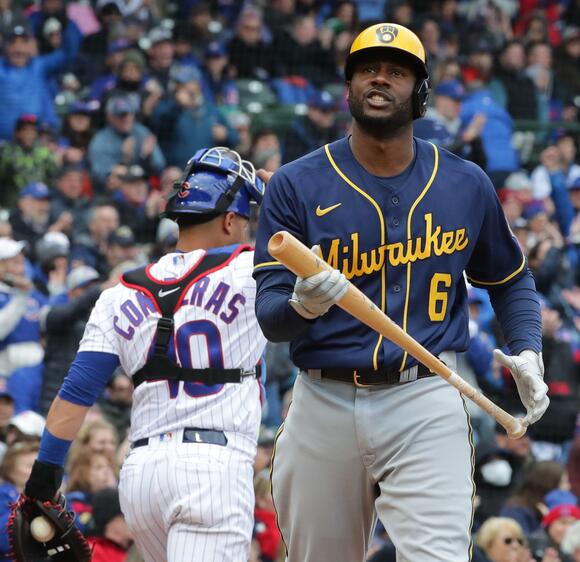 Lorenzo Cain was struggling through 2022 season

This season had been a struggle for Cain, who signed a five-year, $80-million free agent deal with the Brewers before the 2018 season. He hit .179 with a .465 OPS, ultimately being relegated to a role on the bench.

The decision, Cain said, was a mutual one.

“It just got to a point where it’s probably time,” he said. “I haven’t been performing like I would’ve liked but the situation is what it is. I’ve had a great career. I can’t really be upset about anything. But, yeah, it’s time.

“I wish all my teammates the best, coaches, trainers, everybody that I’ve played with or met throughout my entire career, I wish them nothing but the best. It’s been a really fun ride for me for sure.”

Cain was drafted by the Brewers in the 17th round in 2004 out of Tallahassee Community College and worked his way up to make his big-league debut with the team in 2010. The Brewers traded him to Kansas City before the 2011 season in a deal that brought Zack Greinke to Milwaukee.

He won a World Series, was named an all-star once and won the 2014 ALCS MVP award while with the Royals.

“I’ve been fortunate enough to only play for two teams,” Cain said.

Cain was an instant hit upon joining the Brewers for a second time in 2018. He was named an all-star for the second time in his career and finished seventh in MVP as Milwaukee came within one game of reaching the World Series.

“His 2018 was an incredible season,” Counsell said. “I don’t know if it gets statistically ranked as that, but just what he did (was incredible).”

The play stood out to Counsell from that season was a display of baserunning wizardry from Cain against the Chicago Cubs in which he directed traffic on the bases to foil the team’s rival out of an out.

An up-and-coming Brewers team was attempting to overtake the Cubs in the division –two years after Chicago had won the World Series – and every game mattered as the race came down to the very end of the season.

“To me, it was symbolic, a little bit and a play that, you know, trying to take over, beat the Cubs,” Counsell said. “And we beat them with a brilliant baserunning play, which is always the best way to beat somebody.”

Cain wasn’t done with memorable moments against the Cubs that season, either.

As Stearns reflected on Cain’s career, he referenced his go-ahead base hit in the eighth inning in Game 163 as the Brewers won the division at Wrigley Field.

Cain had many memorable moments in center field for the Brewers

Other moments that stood out, he said, were Cain’s game-saving home run robbery on opening day in 2019 and how he “scotch-taped himself together” and played through injury in Game 4 against the Atlanta Braves in the NLDS last year.

“That was a game that he had no business playing in and performing in,” Stearns said. “I think that exemplifies the type of player Lo is. There are very few players I’ve ever been around who would have the ability to get on the field.”

Cain won his first Gold Glove in center field in 2019 and was a superb defender all the way through his time with the Brewers. According to Baseball Reference, his defense alone was worth 5.7 wins above replacement.