Lightfoot, Brown: Mexican Independence should be celebrated, but Friday night... 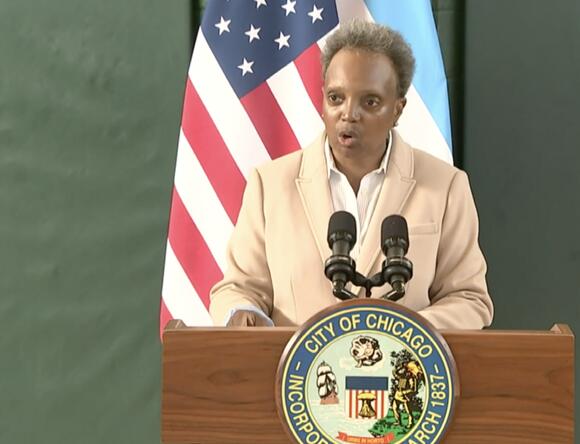 “I love the idea of having the City of Chicago painted in green, white and red,” said Consul General of Mexico in Chicago Reyna Torres Mendivil, as she urged the city’s Mexican American community to celebrate heartily — but to do so according to the rules.

Some of those rules, according to Mayor Lori Lightfoot , have been broken over the past few nights.

“Unsafe and reckless behavior,” Lightfoot said. “Blocking major roadways of transportation to do doughnuts is not safe. Lighting fireworks in the middle of the street is not safe. Honking horns and loud music, until all hours of the night, is not being respectful.”

The mayor also took the opportunity to lambast those who have used the excesses of the Mexican Independence Day celebration as an excuse to discriminate or hurl racist rhetoric against people of Mexican heritage.

Lightfoot called on those celebrating to do so safely and respectfully.

“We need to come together as a city and say, loud and clear, ‘We will celebrate. We will celebrate peacefully and joyfully, but we will do it safely and in a way that is respectful to all of our residents in all neighborhoods,’” Lightfoot said. “Anti-social behavior is simply unacceptable.”

Chicago Police Supt. David Brown also addressed the situation. Like Lightfoot, Brown was careful to note that he wants people to be able to celebrate, but he said those celebrations crossed the line Friday night.

“I want to thank those who are participating in these celebrations safely, and in accordance with the law,” Brown said. “This should be a time for people to come together and have a great time. That being said, we did see some incidents last night that stemmed from the car caravans downtown that went across the line: attacks on officers. We had to make arrests.”

Brown said one police officer had to be taken to a nearby hospital after someone threw a frozen water bottle at them and hit the officer in the face. He added that the congestion impacts the ability to respond to emergencies beyond the Loop.

“Let me explain: Cars congesting traffic, causing gridlock, blocks ambulances and other emergency vehicles from going in and …