The setting is the drawing room at Balmoral. A flustered Prince Andrew bursts in to tell his mother, the Queen, that his estranged wife has been photographed in St Tropez “doing something unmentionable” with her financial adviser.

Despite the Queen insisting she doesn’t want to know, Andrew exclaims: “Sucking Sarah’s toes, Mummy! Can you imagine? An actual foot. If he was that hungry he could have just ordered a sandwich.”

“Or some sole,” quips the Queen.

The scene, a jokey interlude in the latest season of The Crown is clearly intended to titillate and amuse viewers.

But one man is not laughing.

John Bryan is the financial adviser at the heart of the 1992 “toe-sucking” scandal, and he has just two words to say about The Crown’s version: “Total fabrication.”

“I have a sense of humour about this but it’s based on a lie,” he says.

“These lies go back three decades.” 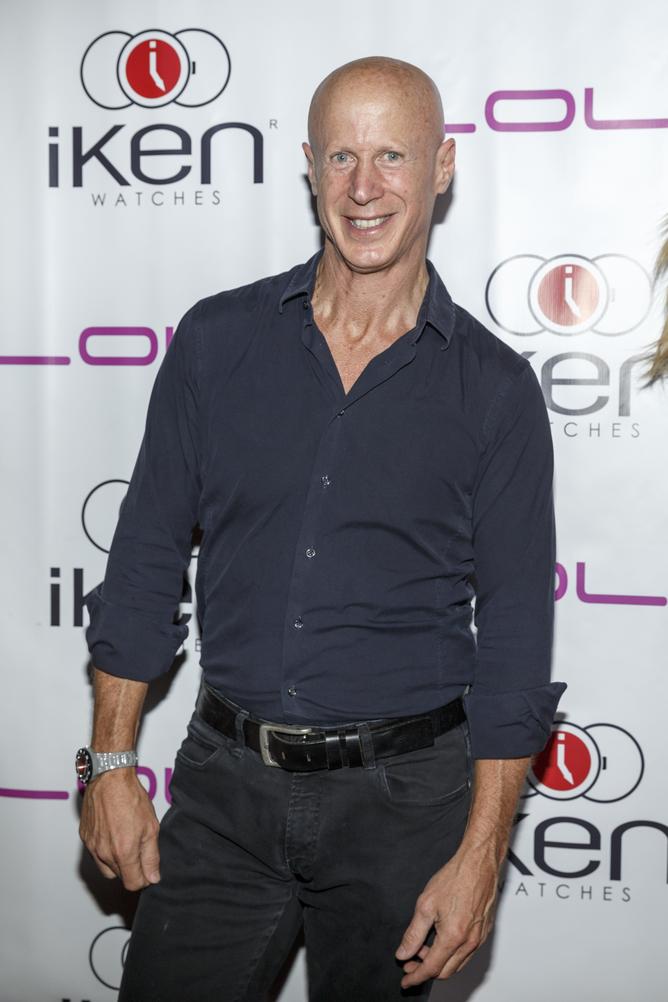 John Bryan in Hollywood back in 2015.

This weekend, speaking to The Mail on Sunday in his plush office in one of LA’s most prestigious buildings and later at his home high in the Hollywood Hills, Mr Bryan broke a 30-year silence to talk about the infamous incident and to lambast The Crown for its inaccuracy.

“Of course it didn’t happen that way,” he says, rolling his eyes.

“My phone has been ringing off the hook with friends calling to tell me I’m in The Crown. In a weird way it’s a great honour to be in the show. But if you go back 30 years, it’s all based on lies. It’s more serious. That’s where the lies started.

“I don’t want to be forever known as ‘Fergie’s Texan toe-sucking financial adviser’. For starters, I’m from New York.”

The notorious photographs were taken in August 1992 at a secluded private villa in the South of France, a few months after the Duchess of York had officially separated from Prince Andrew.

Mr Bryan, a multi-millionaire businessman, had met Fergie through mutual friends in London where he cut a swathe as a dashing man about town.

“The attraction was mutual — and instant,” he grins. “I loved her then and I adore her now.

“We were in a private villa with seven acres of land surrounding us to ensure our absolute privacy. The girls (Princesses Beatrice and Eugenie) were tiny, just four and two. We were out by the pool and I was practising swimming with the children. 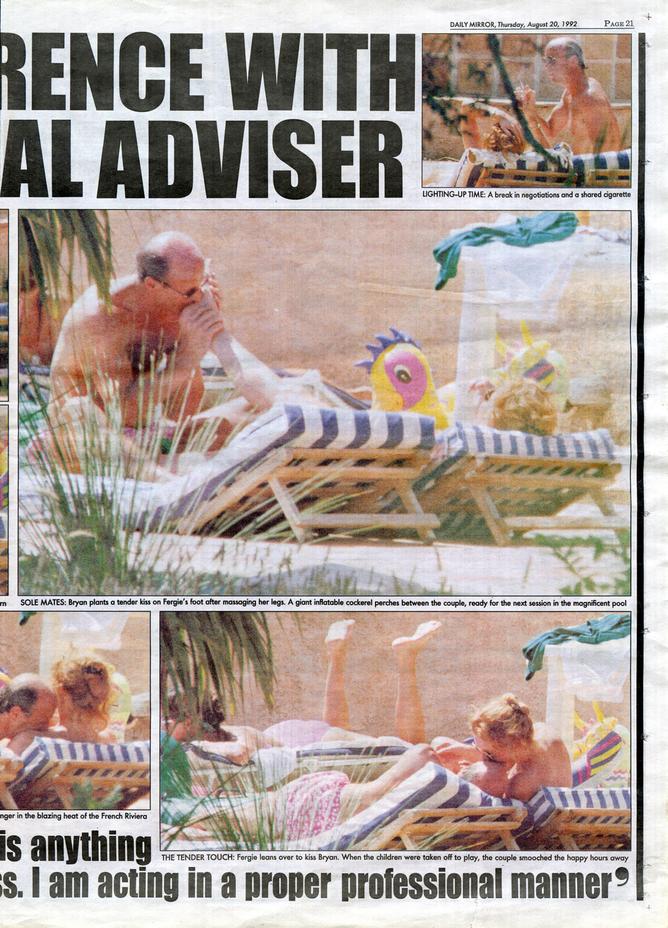 How the Daily Mirror covered the story in 1992.

“Yes, Sarah was topless, but this was the South of France for heaven’s sake. And we were in private — or so we thought. We’re with the kids, having a great time. We used to play fun games, make-believe games. On this day we were playing Cinderella and I said, ‘Look, let’s kiss Mummy’s toes’. It was part of the game. I did it first and then I think one of the girls, probably Beatrice, did it.

“It was totally innocent; a beautiful family moment of love.”

But a paparazzi photographer had crawled through the undergrowth surrounding the villa and was lurking in the bushes with a long lens.

The subsequent photographs prompted a global bidding war with UK rights being acquired by a national newspaper for a reported £8 million. “I went to the High Court to try to stop publication but I lost,” Mr Bryan says. “That’s when the nightmare began.”

At 67, he still has the roguish good looks which captivated a Duchess. Impeccably turned out, he favours slick Savile Row business suits and ’dresses down’ in designer Yves St Laurent jeans and a leather Prada jacket.

He fields constant calls and is one of those people who bubbles with what he jokingly calls “massive positive energy” — something he still uses to reassure a sometimes troubled Sarah, who remains a friend, that “life is going to be OK”.

When the photos appeared, Mr Bryan said he was initially relieved that they were not worse. 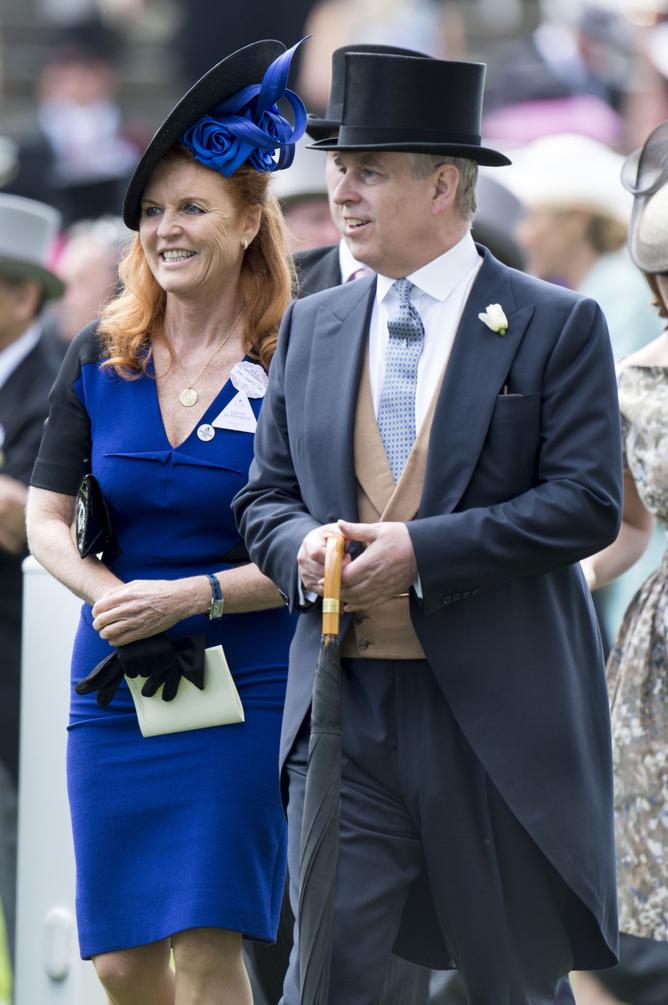 Sarah Ferguson, Duchess of York and Prince Andrew, Duke of York at Ascot Racecourse in 2015.

“When I learned there were pictures out there and there was a bidding war, my fear was that someone had put cameras inside the house. I was thinking, ‘What in God’s name could we have done that is worth £8 million?’

“The last thing on my mind was any worry whatsoever about playing Cinderella at the swimming pool with Beatrice and Eugenie.

“When the pictures appeared I was in London and Sarah was at Balmoral with the girls and their father.

“My assistant went out to get the paper and my initial reaction when I saw them was relief. I thought, wow, they are beautiful photos.

“Then I started reading the story and it was a twisted, sick, fabricated narrative. They sexualised something so innocent. That was the most despicable part.”

He is clearly still angry at the Royals for not backing his legal bid to quash the photographs.

He says: “The knives were out for Sarah at the Palace. Her separation from Prince Andrew had been announced that March.

I’ve let it all go for decades. Now all the mistruths are being repeated again. I’ve waited this long — now I’d like to have the final say.

“In my opinion my bid for an injunction failed at the High Court because of a lack of support from Buckingham Palace. They (the courtiers) should have done their job and should have supported what was right for the Royal Family, which was to support her.

“In the world of British law, the silence from the Royals when I fought to stop the pictures being published was a loud message that, actually, it was OK.”

Mr Bryan says the effect on his lover was devastating: “Sarah took the full force and brutal devastation of letting down the Queen.”

The disgraced Duchess immediately left Balmoral and returned to Surrey. Prince Philip was reportedly so furious with her that he refused to allow her to be invited to Royal events.

She and Andrew officially divorced in 1996 and she was stripped of the title Her Royal Highness. 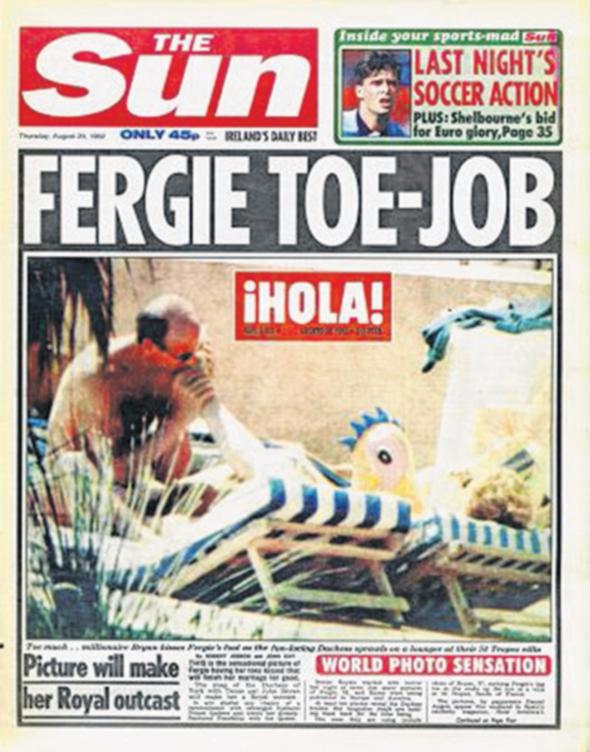 In the annals of history — and in The Crown — Mr Bryan is dismissed as a brief fling. In fact, he remained romantically involved with the Duchess for another four years, living at her rented £4,000-a-month Romenda Lodge on the Wentworth Estate in Surrey while maintaining a penthouse flat in London. Indeed, Mr Bryan even had an affectionate pet nickname for the Duchess — Linky, short for Dar-linky.

The pair had been so burned by the frenzy surrounding the toe-sucking pictures that they went to great pains not to be photographed together or even allow anyone outside their closest circle to know they were in a relationship.

“Most of the time we stayed home,” he says.

“It was a gated community. We had 16 royal protection officers — four people working for eight-hour shifts, so 12 every day with four in reserve. They were there to protect the granddaughters of the Queen.

“There was a beautiful building at the…