Joe Biden has nothing to offer

Near the end of an especially tumultuous week in his tumultuous presidency, Joe Biden gave his first media interview in four months to someone who wasn’t a late-night comedian. For a public hungering for answers, it wasn’t worth the wait.

The president chose The Associated Press and the sit-down lasted a little less than 30 minutes, but that was more than enough time for him to demonstrate again he’s got no new ideas or even a new way of packaging old ideas.

Biden acknowledges America is in a funk, but shows no sense of compassion or determination to turn the tide.

Asked about the public mood, the president said, “People are really, really down.”

(Down, as Biden himself was after falling off his bike Saturday, an apt symbol of his presidency!)

Later in the interview, he gave this advice: “Be confident. Be confident. Because I am confident. We are better positioned than any country in the world to own the second quarter of the 21st century.”

That’s supposed to be inspiring? Technically, the century’s second quarter will begin in 2026, so Americans should just grin and bear it until then?

Bad policies cause trouble, but they are compounded infinitely when a president is so impervious he doesn’t feel the need to change them, or simply isn’t capable of rousing himself to make changes. 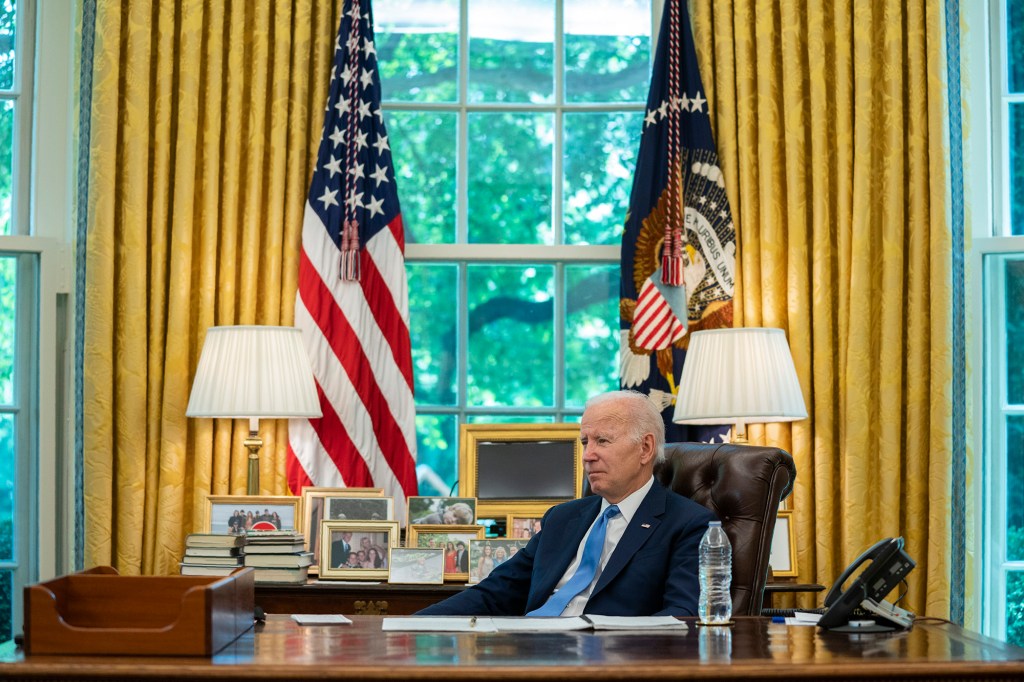 President Biden listens to a question during an interview with the Associated Press on June 16, his first media sit-down in four months. 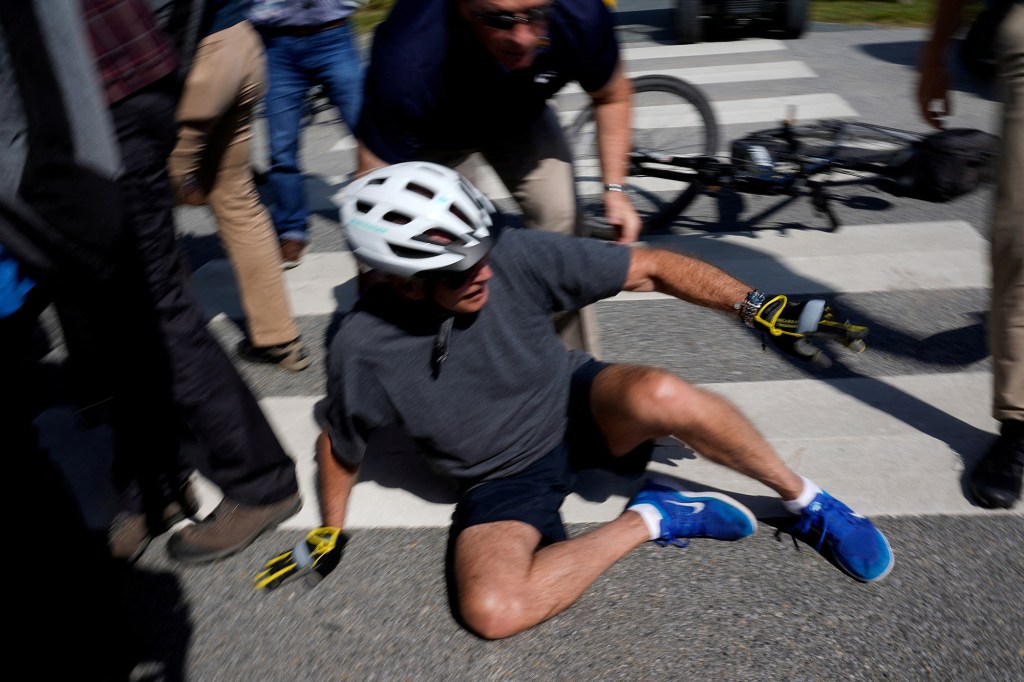 Biden fell off of his bike while riding in Rehoboth Beach on June 18.

Of the many crises America faces, the most serious one sits in the Oval Office.

We have a president who doesn’t even pretend to be working night and day to beat back inflation, save the economy from a recession or tackle rampant crime and growing political violence. He looks to be on automatic pilot when the nation desperately needs strong leadership.

The interview took place on the day the stock market cratered to new lows amid a growing belief a recession is about to rock the economy and wipe away jobs, savings and dreams. Trillions of dollars in wealth have vanished, and the White House is silent.
Even Democrats are jumping off the Biden ship as more and more say publicly they don’t want him to seek re-election in 2024. They wouldn’t be saying that if they thought he was doing a passable job now.

Yet the morning after the interview, Biden displayed his version of Alfred E. Neuman’s “What, me worry?” attitude and left the White House for another four-day trip home to Delaware. As he stopped to answer a question from reporters about gas prices, which had just hit a record national average of $5 a gallon, First Lady Jill Biden cut him off, saying, “We gotta go!” and off they went.

Through May, the president spent 188 full or partial days away from the White House, according to the Washington Examiner, which said he was on a pace to spend 553 days away over a full term.

That would be the most of any modern president, with former President Donald Trump coming in a distant second at 381 days.

This is more than bad optics. It’s a sign Biden is tuned out and merely going through the motions of being president without making a fulsome effort to right the ship of state.
Government unions have a phrase for running out the clock this way: retiring in place, meaning someone who doesn’t really do the job he has but likes the money and perks too much to give it up.

The president’s failures are not news to the public. The RealClearPolitics average of polls in the last two weeks puts his approval number at a dismal 39.8%, his disapproval at 54.7%.

Even in blue New York, a Siena College survey found Empire State voters in a sour state of mind, with just 35% approving of his job performance. 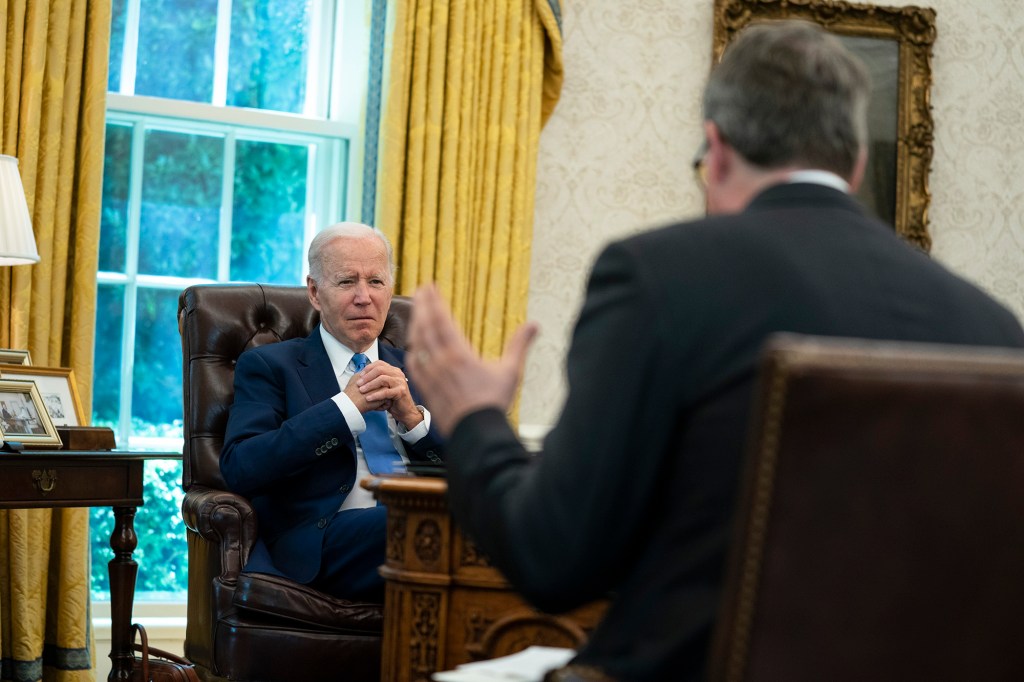 Biden interviewed with Josh Boak from The Associated Press for his first media interview in four months.

This is an untenable situation, given the crises at home and the rising threats of global war abroad. Trust in most public institutions is at historic lows and many Americans are losing faith their country remains the planet’s last, best hope.

In past times like these, the character, personality and conviction of the president have been the necessary beacons of hope to lead the nation forward.

The transcript of the AP interview reveals in detail how Biden falls far short of that requirement. Instead of using the interview to signal a reset of his presidency, he lapsed into his desultory habits of digression and deflection, with no message of hope emerging from the verbiage of mush.

The reporter who conducted the interview, Josh Boak, didn’t have much to work with despite an earnest effort. He began his story of the interview this way:

“President Joe Biden said Thursday the American people are ‘really, really down’ after a tumultuous two years with the coronavirus pandemic, volatility in the economy and now surging gasoline prices that are slamming family budgets. But he stressed that a recession was ‘not inevitable’ and held out hope of giving the country a greater sense of confidence.”

Feel inspired yet? Does having the president say there might not be a recession, without any evidence, give you confidence?

Overall, Biden was the usual Biden, meaning he made predictable attempts to blame gas prices on the Russian invasion of Ukraine and greedy oil companies, spun the usual pieties about his life-long concern for the middle-class and attacked Republicans for not supporting his mammoth tax and spending plans.

As if to demonstrate his detachment from reality, he repeated the fictional claim that his administration has been wildly successful with its domestic agenda. 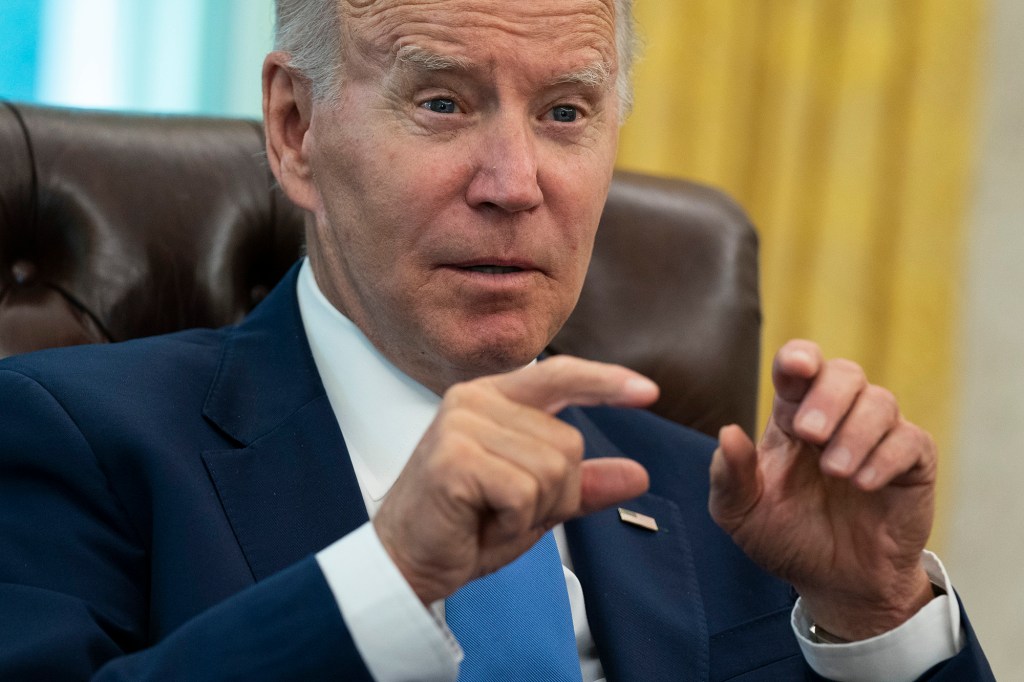 Biden was quick to blame Putin and “greedy” gas companies on the cost of gasoline again during his interview with The Associated Press.

Pointing to the $1.9 trillion COVID rescue package that passed early in his tenure — the one that is now widely blamed for helping to ignite inflation — the president declared, “Name me a president that’s done anything like that before.”

Keep up with today’s most important news

Stay up on the very latest with Evening Update.