Jeopardy! screwed up again and fans are mad as hell

The most pretentious game show on television has slipped up again.

Hawk-eyed “Jeopardy!” viewers have spotted another error, this time in a Final Jeopardy! clue on Wednesday.

The category was 19th Century Literature, with the clue: “This author first thought of a parrot before choosing another bird ‘equallly capable of speech.’”

NBC News’ Ben Collins tweeted a screengrab image from the June 22 episode that shows the screwup. “Spot the typo in Final Jeopardy!” he prompted.

The answer was “Edgar Allen Poe,” but the goof had nothing to do with him — it was the third “L” in the word “equally.”

“What typo, Ben Colllins?” joked music journalist Pamela Chelin with her own typo in response to Collins’ tweet.

However, some viewers didn’t find the typo so funny. 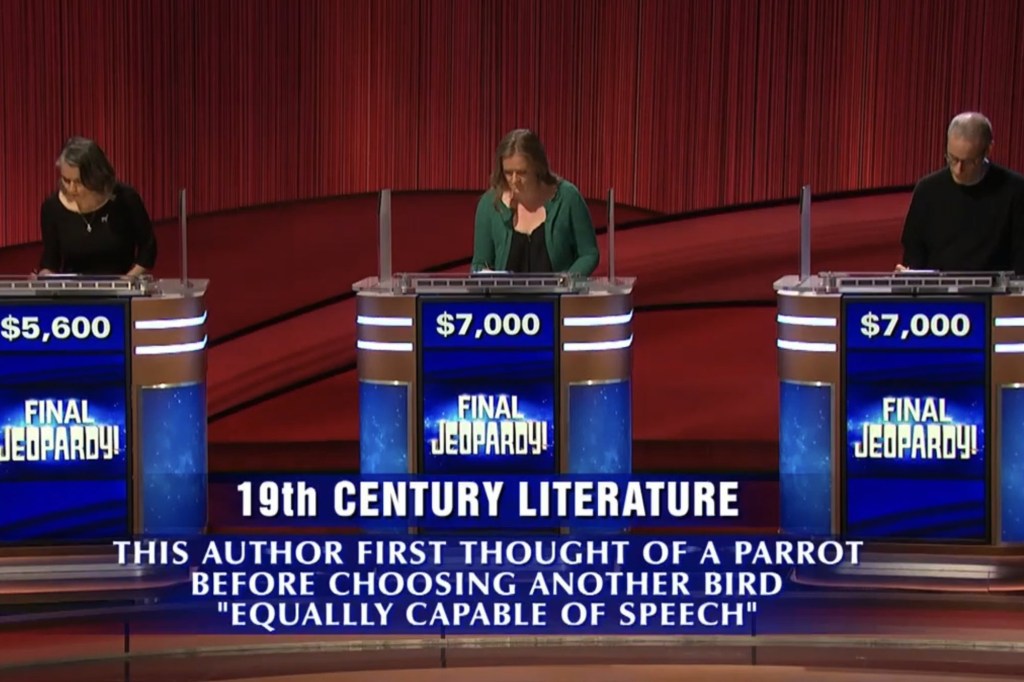 Hawk-eyed “Jeopardy!” viewers have spotted another error, this time in a “Final Jeopardy!” clue on from Wednesday night’s episode.

“Wow, not the same standard of excellence,” declared one critic.

“Wow, made it through the final edit!” mocked another. “You’d think there would be a team just checking for this sort of thing.”

“Jeopardy!” producers had time to correct the boo-boo for their digital audience, who saw the clue in its corrected form, as some fans later pointed out on Twitter. Nevertheless, some were comforted by the idea that such a mistake could happen to anyone, apparently including Collins himself.

“As a guy who can’t write a tweet without forgetting a word in the middle, I finally feel like I’m on Jeopardy’s level,” he responded in his thread.

Meanwhile, some angry viewers called out Collins for inadvertently spoiling the climax of that evening’s game before they had the chance to see it live on the West Coast.

“It’s annoying as fvck when people on the east coast tweet @Jeopardy final clues before it airs on the west coast… it would be great if you all would stop doing that,” one critic wrote.

It’s one of the few in their 38-season long run, but the second in only a couple of weeks.