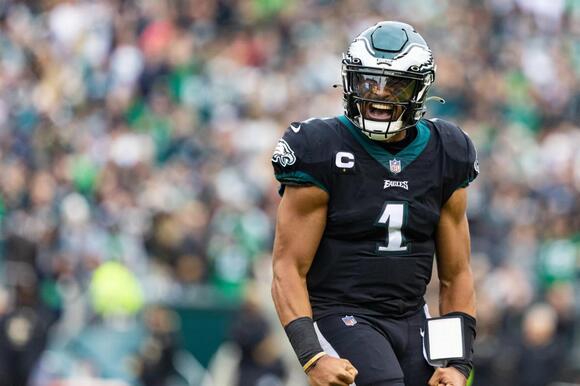 The QB has had his share of ups and down in his one-plus years as the Eagles’ starter, but here is a look at his five best games

Jalen Hurts has had his share of ups and downs in his first 20 NFL starts, which happens to be the fewest of the other three quarterbacks in the NFC East among Daniel Jones, Dak Prescott, and Carson Wentz.

The Eagles’ QB has posted a passer rating above 100.0 in even of those starts, yet the team has a record of just 4-3 when he tops that mark.

Here is a look at the five best games played by the Eagles’ quarterback of those 20 starts:

This was just the second start of Hurts’ career, and if it wasn’t for a defense that was abysmal most of the season, it might be more memorable. As it was, it was a 33-26 loss, but Hurts was unflappable, going toe-to-toe with Kyler Murray after falling behind 16-0.

Had the defense showed up and not allowed Murray to shred them to the tune of 26-for-37, 406 yards, and three TDs, this game might be higher on the list.

Hurts threw for just 147 yards, with only 13 completions in 24 tries and did not have a touchdown throw or an interception, yet he was a force on the ground, running for a career-high three touchdowns in a 40-29 triumph over New Orleans.

His TD runs covered 1 yard, 3 yards, and a highlight-reel 24-yarder that left Saints defenders grasping at air, especially DE Carl Granderson who was completely left in the dust with an ankle-breaking cutback by Hurts.

The Saints came into the game with a 5-4 record. Philadelphia was coming off a road win in Denver a week earlier and sat at 3-6 but was on their way to turning their season around.

This was Hurts’ first career start, and it came in the crucible of the benching of Carson Wentz for struggles not becoming of a face of the franchise. The decision opened a divide that could not be repaired and, well, the rest is history.

Hurts showed moxie in stepping into the situation, which was compounded by the fact that the Saints were really good, sailing along with the best record in the NFC at the time with just a handful of games left, and the Eagles were buried at 3-8-1.

The moment was not too big for Hurts, though it was his legs, more so than his arm, that helped spark the 24-21 upset.

He ran for a still-career-high 106 yards on 18 carries. Hurts did just enough throwing the ball, completing 17 of 30 passes for 167 yards for an 83.6 passer rating. His day included a 15-yard TD throw to Alshon Jeffery that opened the game’s scoring early in the second quarter.

Just 48 hours before kickoff, this game got postponed for two days due to an outbreak of COVID-19 among the Washington players.

Perhaps it was beneficial to Hurts, who had sprained an ankle three weeks earlier against the Giants and had to miss the following week’s game against the Jets before the bye week.

Still, the ankle, as it was learned weeks later when he had offseason surgery to repair it, was still not 100% no matter what anybody said.

Hurts kept the Eagles’ playoff hopes alive with a solid game in which he completed 20 of 26 passes, a completion percentage of 76.9 that narrowly missed his career-high.

He collected 296 yards passing and 38 rushing while throwing for one touchdown. The only blemish in the 27-17 win was an interception, but his passer rating was a gaudy 110.4.

Despite the Eagles never fully committing to him in the offseason, exploring various avenues to import …