‘It’s a miracle we were not killed’: Harbor police fired... 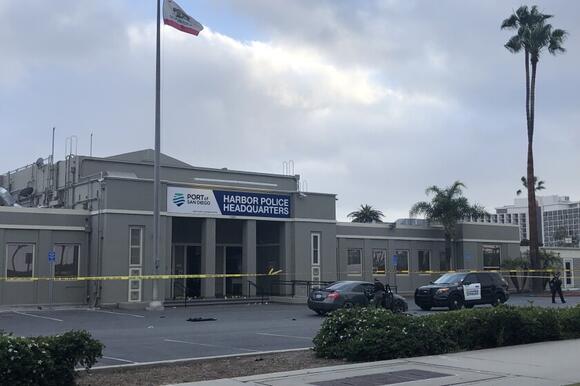 On a Sunday afternoon in April, Billy and Robin Stewart dodged a bullet.

The San Diego couple were on their way home after celebrating their 44th wedding anniversary on Harbor Island on April 10. They had just turned onto North Harbor Drive when gunshots rang out and a bullet struck the side of their 1997 Ford Expedition. The round lodged in the front passenger door, just below the window.

Billy Stewart was in the front passenger seat. His wife was behind the wheel.

“We didn’t know what was going on,” he recalled in an interview.

It turned out three Harbor police officers had opened fire on a man who was armed with a gun in front of the department’s headquarters on North Harbor Drive, across from San Diego International Airport.

The officers fired dozens of times. Two of the officers fired all of the rounds in their clips, then reloaded, and one of them fired additional shots, according to footage captured by their body-worn cameras.

The suspect, Eric Jesus Medina, 29, was critically wounded. He survived and was charged in San Diego Superior Court with assault with a deadly weapon on a police officer. He has pleaded not guilty.

In the aftermath of the shooting, police did not disclose publicly that a round struck a passing vehicle.

The Stewarts acknowledge the gunman posed a danger and don’t fault the officers for opening fire, but they believe the number of rounds the officers fired was excessive, putting the couple’s lives — and the lives of others on North Harbor Drive — in danger.

“It’s a miracle we were not killed,” said Robin Stewart, 70. “If you have to shoot off (dozens of) rounds — that’s reckless. You need to be in control, not just a loose canon with your gun.”

Harbor Police Chief Magda Fernandez, a department veteran who was promoted nine days after the shooting, said officers learn in training that when they use force to make an arrest or “stop a threat,” they must consider the threat at hand and what may be in the background.

The chief noted that the San Diego Police Department is investigating the shooting as per protocol. She said she was not privy to details of the investigation.

The incident unfolded around 1:30 p.m. after a man, who police later identified as Medina, drove up to the department’s headquarters, where he parked, walked up to the front entrance and used a callbox to speak with a dispatcher.

“Hello, I was wondering if you could help me right here outside in front,” the man says, according to audio of the call, which the Police Department released in mid-April along with body-worn camera video.

“Yeah, what can we do for you?” the dispatcher asks.

The man doesn’t answer the question. “Thank you,” he states, then walks toward his car.

Police said the man pulled up to the front entrance.

“Hey, how’s it going? You want to talk to an officer?” Macmaster asks the man as he stands at what appears to be the top of the front steps. “What’s going on?”

The man pulls out the handgun. Police said he pointed the weapon at the officer; the moment is grainy on video.

The officer rushes to take cover behind a nearby concrete pillar and draws his firearm.

“He’s got a gun, he’s got a gun,” the officer announces over his radio. He then tells the man to put his hands up and drop the gun on the ground.

The man raises his hands, gripping the gun with his right hand, then appears to swing it over to his left side.

Macmaster opens fire. He fires more than a dozen rounds before telling the man again to drop the gun.

As Macmaster repeats commands and continues to fire, Sgt. Scott Ferraioli and Lt. Victor Banuelos walk into the lobby. Banuelos fires through the front window of the lobby just before Ferraioli walks out the front door to join Macmaster. Ferraioli stands partially behind a concrete pillar and fires. Both Macmaster and Farraioli empty their clips, then reload. Macmaster fires additional rounds.

The body-worn camera video ends as Banuelos takes cover inside the lobby.

Police said Macmaster has been with the department for seven years, Ferraioli for 22 years and Banuelos for 24 years.

‘It was a continual fusillade’

Policing experts who reviewed the body-worn camera video at the Union-Tribune’s request said the incident appeared to be a case of an attempted suicide by cop, a situation in which someone behaves in a threatening manner with the intent to compel police to use lethal force.

The experts said they believe the gunman presented a threat, and added that the officers’ decision to open fire seemed reasonable. Medina’s attorney declined to comment.

But, the experts questioned whether so many rounds were necessary and whether officers took into account the background when they opened fire and continued to fire.

“It was a continual fusillade,” said Sid Heal, a retired Los Angeles County sheriff’s commander. “It doesn’t seem like anybody assessed the situation once it was under way.”

He noted that the gunman didn’t return fire, and said that the moment officers reloaded their handguns was an opportunity to re-assess the situation.

“At some some point and time we need to assess the effectiveness of our actions versus the suspect,” Heal said.

David Klinger, a criminology and criminal justice professor at the University of Missouri-St. Louis whose past research topics include police use of force, said it was difficult without further information to say whether officers fired too many rounds. Klinger, a former police officer, said officers will usually fire until they feel there no longer is a threat…