‘It was a really good day.’ Dodgers complete confidence-boosting sweep... 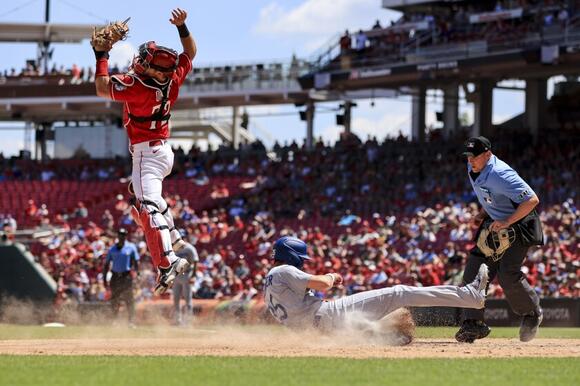 The Cincinnati Reds have one of baseball’s lowest payrolls, one of its least productive lineups and, when measured by team ERA, the sport’s worst pitching staff.

They’re so far out of the playoff picture, even their executives seem to have raised the white flag, announcing this week they’ve booked a weeklong TopGolf event at their home stadium — in the middle of October.

Sweeping the Reds, therefore, will likely not be one of the Dodgers’ greatest accomplishments this season.

But for a team that had been struggling at the plate, battling injuries across the roster and playing a lot of uninspired baseball in recent weeks, the dominance they displayed in three straight wins this week — punctuated by a 10-5 rout on Thursday that featured a season-high five home runs from the lineup — could have hardly come at a better time.

“A few weeks ago, we had a rough patch,” center fielder Cody Bellinger said. “Now we’re hitting like we should.”

After pulling away late in the first two games of the series, the Dodgers surged in front early on Thursday.

Bellinger opened the scoring with a sacrifice fly in the top of the second, before Freddie Freeman added to the cushion with a two-run homer in the third — the first baseman’s third blast in the past four games and eighth of the season overall.

Bellinger then came through again in the fourth. Mired in an 0-for-14 slump and batting eighth in the order for the first time since April, the slugger responded by getting the green light in a 3-and-0 count against Reds starter Hunter Greene, belting a two-run homer to right.

“Always nice to join the hit parade,” he said with a smile, after adding two singles later to finish three for four.

Indeed, the Dodgers lineup was far from finished.

Max Muncy added a towering solo blast in the fifth, breaking out of his own recent struggles — he had just five hits in his previous 34 at-bats dating back to his five-RBI return from the injured list earlier this month — with his first three-hit game of the season.

“It was a really good day,” Muncy said. “We’re working on a couple things mechanically and trying to get back to where I need to be. That’s why today is a very validating day, having the results there.”

Down the stretch, Will Smith and Trayce Thompson added solo home runs to help the Dodgers (43-25) pull away.

“It just shows what we’re capable of when we play team baseball,” manager Dave Roberts said. “Up and down the line, I just thought we had the right intentions.”

On the mound, Clayton Kershaw also offered up encouraging signs, continuing to look sharp in his return from a back injury with a six-inning, one-run, seven-strikeout start that lowered his ERA to 2.00 — the best it has been through eight starts in a season since 2016.

Kershaw said he feels completely built up again after his third start back, as well.

“I feel like I’m pretty good to go now as far as pitch count, durability,” he said. “All that type of stuff.”

Even though Phil Bickford had a disastrous seventh inning, giving up four runs to the Reds (23-46) that tightened the score late, the Dodgers still left Cincinnati with the kind of confidence boost that had eluded them during a 7-11 skid before this series.