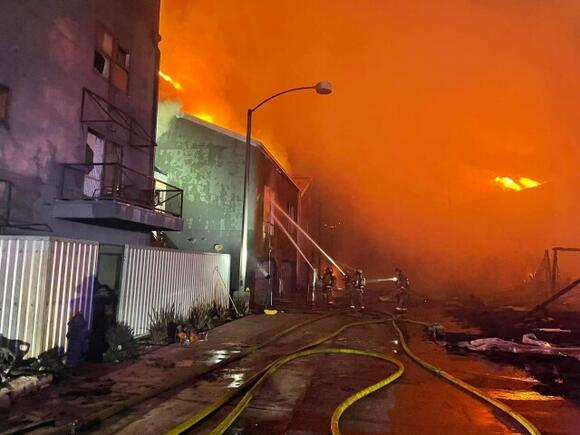 Hundreds of people are displaced and at least 10 buildings were burned in an overnight fire in downtown Las Vegas Sunday, according to Las Vegas Fire & Rescue public information officer Tim Szymanski.

Two people who evacuated their condo overnight said they left without shirts, phones, or any of their belongings. They said that their condo was deemed “uninhabitable,” and they are not sure if their car is burned.

People said they saw neighbors clinging to their cats and dogs as they ran out.

The exact number of buildings, condo units, businesses and vehicles that were damaged or destroyed has not been determined by officials.

At least 100 people went to an evacuation center at Hollingsworth STEAM Academy on E. Ogden Ave, according to authorities. Several other residents went to a nearby motel.

Szymanski says a Las Vegas Fire & Rescue crew returning to their station from a previous call noticed a large column of smoke around 1 a.m. on E. Charleston Blvd.

As they approached, fire crews say they found a building under construction inside a condominium complex on 200 Tower St. engulfed in flames, threatening several nearby occupied condos.

Szymanski says firefighters woke nearby residents, telling them to evacuate as soon as possible.

As the fire continued to grow due to brisk southwest winds, Las Vegas Fire &a…