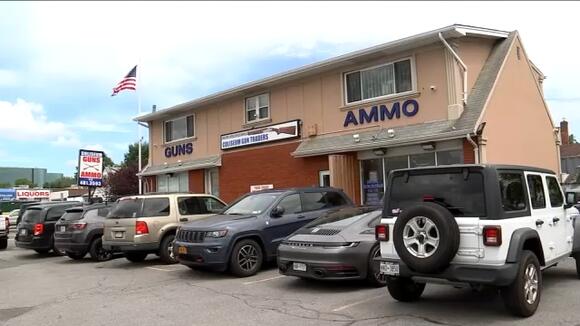 Elected officials in New York and New Jersey wasted no time voicing their opinions and talking about the next steps after the Supreme Court ruling to strike down the concealed carry law in New York .

Governor Kathy Hochul said while the decision necessitated no immediate change to New York state law, she anticipates a rush to get concealed carry permits, using the decision as justification. But people can’t immediately start walking around with a concealed weapon.

Governor Hochul called a special legislative session to address the permitting process for concealed carry and attempt to limit places where concealed carry is allowed and to give businesses and property owners the ability to ban concealed weapons.

The state will be looking at “sensitive locations” where concealed carry will be banned. When asked if all of New York City is one, Hochul said, “In my opinion, they are.” However, the Supreme Court opinion seems to disagree.

They note that the high court sent the case back to a lower court for further proceedings that could iron out implementation details.

Officials in the nation’s most populous city immediately began reviewing its gun permit application process and pondering how they now might legally define “sensitive locations” where civilians wouldn’t be allow to bring guns.

“There is no place in the nation that this decision affects as much as New York City,” Mayor Eric Adams said at a news conference. “And we are prepared to set an example that will lead the country as to: how do we fight back on this decision?”

Adams, a Democrat and former police captain, raised the specter of everyday disputes turning into shootouts in New York’s crowded streets and subways. He suggested that police officers would face greater danger, as well as a greater burden of distinguishing between legal and illegal guns in public places.

Bronx District Attorney Darcel Clark seconded that fear, believing that more guns in the mix will result in minor disputes escalating quickly in crowded spaces, especially in her borough of the Bronx, where there is already no shortage of gun violence.

“This decision severely undermines public safety not just in New York City, but around the country. While the Court has now made it more difficult to limit the number of guns in our communities, I am committed to doing everything in my power to fight for the safety everyone in this city deserves, and we have been preparing for this decision for weeks,” Manhattan District Attorney Alvin Bragg said. “New York still has some of the toughest gun laws in the country on the books, and we will continue to use these statutes to hold accountable those who commit gun violence. At this very moment, my office is analyzing this ruling and crafting gun safety legislation that will take the strongest steps possible to mitigate the damage done today. Furthermore, we have already built detailed processes and put them in place to manage any litigation related to our ongoing cases. The Supreme Court may have made our work harder, but we will only redouble our efforts to develop new solutions to end the epidemic of gun violence and ensure lasting public safety.”

U.S. Rep. Lee Zeldin, a Long Island Republican running for governor, who has supported the lawsuit, said the decision marked “a historic, proper, and necessary victory for law abiding citizens of New York, whose Second Amendment rights have been under constant attack.”

“I can assure you that we’ll follow the letter of the law, but at the same time, we want to make sure we have a safe community,” Blakeman said.

Elected officials wasted no time voicing their opinions and talking about the next steps after the Supreme Court ruling on the concealed carry law. Kristin Thorne has more on the reaction on Long Island.

Nick Langworthy, chair of the New York state GOP and a congressional candidate, called the ruling a win for the public over politicians.

“Today’s Supreme Court ruling is exactly as it should be — a final authority that protects the constitutional rights of citizens against a dictatorial government,” Langworthy said.

Langworthy, Zeldin and other Republicans criticized Democrats for what they see as threatening new restrictions on gun owners rather than passing tougher crime laws.

Sen. George Borrello, a Republican from western New York, called the ruling “a validation of the Second Amendment and a victory for law-abiding gun owners in our state.”

“Our nation is in the middle of a gun violence epidemic and instead of working to protect our communities, this court has made it even easier for potentially dangerous people to carry concealed handguns in public spaces,” the Democrat said.

“Based on a deeply flawed constitutional methodology, a right-wing majority on the United States Supreme Court has just said that states can no longer decide for ourselves how best to limit the proliferation of firearms in the public sphere. Let there be no mistake – this dangerous decision will make America a less safe country.

“But let me be equally clear that, here in New Jersey, we will do everything in our power to protect our residents. Anticipating this decision, my Administration has been closely reviewing options we believe are still available to us regarding who can carry concealed weapons and where they can carry them. We are carefully reviewing the Court’s language and will work to ensure that our gun safety laws are as strong as possible while remaining consistent with this tragic ruling.”

He predicted it “will unleash even more gun violence on American communities.”