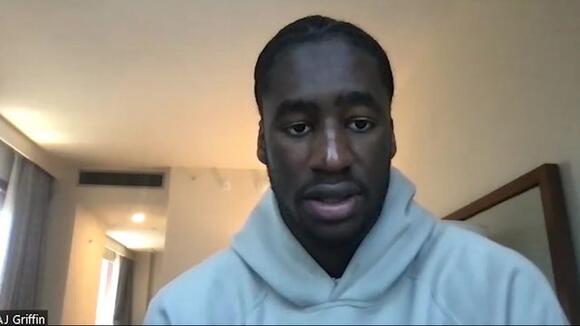 Looking to bounce back from a disappointing season, the Atlanta Hawks drafted forward A.J. Griffin from Duke with the No. 16 pick in the NBA draft on Thursday night.

Griffin was the third player from the Blue Devils to be picked in the first round, following top overall choice Paolo Banchero by Orlando and Mark Williams going to Charlotte at No. 15.

The 6-foot-6 Griffin was the second straight Duke player to be chosen by the Hawks in the first round, following 2021 top pick Jalen Johnson.

Atlanta is coming off a season that failed to meet high expectations after a surprising run to the Eastern Conference final in 2021.

The Hawks spent much of the year under .500 before landing a spot in the play-in tournament. Two victories pushed them into the playoffs as the No. 8 seed, but Atlanta went down meekly in the first round with a five-game loss to the Miami Heat.

Owner Tony Ressler conceded the team was too complacent during the last offseason and wouldn’t make the same mistake this summer.

Defensive improvement was a big goal as the Hawks considered whether to keep their young roster largely intact or push for big changes. A complementary scorer for All-Star point guard Trae Young might be another priority.

The Hawks ranked only 21st in the league in scoring defense, allowing 112.3 points per game.

Atlanta went into the draft with a bit of a shake-up in the front office. Landry Fields has been promoted to general manager, effective July 1, though team president Travis Schlenk ret…