Gauff has an off day, and gets eliminated from Wimbledon 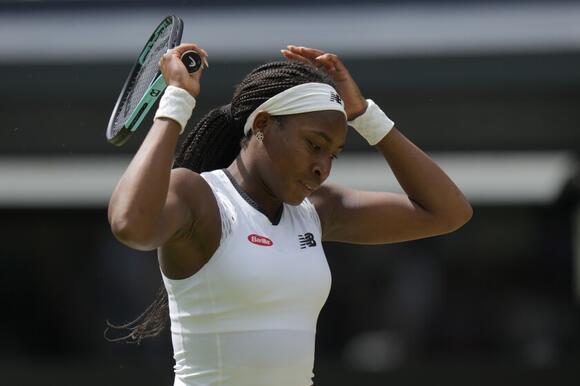 Sometimes, there’s a straightforward, easy way to explain a loss.

Even for someone who reached the French Open final last month and entered the Wimbledon tournament with a very real chance to go deep on the grass courts of the All England Club.

“Today, I think I just didn’t play that well,” said Coco Gauff, who lost in the third round on Centre Court. “I think that wasn’t really anything to do with my head. There’s days like that. I’ve just got to practice to make sure I have less days like that.”

Those types of days, those types of matches, are already few and far between for an 18-year-old American with the very real potential to win multiple Grand Slam tournaments in the future. On Saturday, however, not much was going her way — she lost to Amanda Anisimova 6-7 (4), 6-2, 6-1.

The 11th-seeded Gauff jumped out to a 3-0 lead but then failed to win any of the next four games. She recovered in time to force a tiebreaker and even overturned a 4-1 deficit to win the first set by taking six straight points.

But Anisimova, an American seeded 20th at Wimbledon, then won 12 of the last 15 games to advance to the fourth round for the third straight Grand Slam tournament.

“Well, it’s obviously uneasy to lose a first set 7-6 and bounce back after that. It’s extremely difficult,” Anisimova said. “But I was just trying to slow down the pace and just really take it one moment at a time. Of course, I was a bit more tired after that first set. It was just kind of slowing down. I could feel that the wind kind of calmed down as well so I was able to play my game a bit more.”

Anisimova will face Harmony Tan in the fourth round. The unseeded Frenchwoman beat Serena Williams in the first round, and on Saturday she eliminated Katie Boulter 6-1, 6-1.

The winner will be in the Wimbledon quarterfinals for the first time.

Gauff has never been that far at the All England Club, either. But expectations for her are high after reaching the fourth round in back-to-back tournaments in 2019 and 2021, not to mention this season’s French Open final.

“Tennis, there’s going to be days…