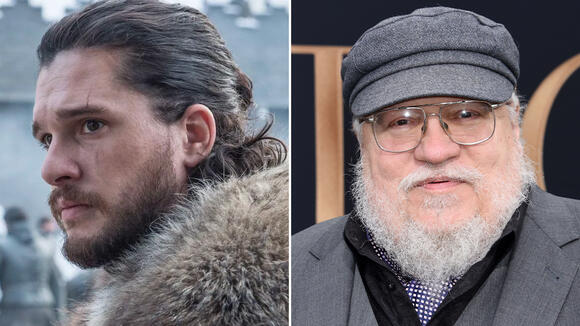 The Game of Thrones sequel starring Kit Harington will be called Snow , and it has all been instigated by the actor, author George R.R. Martin says.

“Yes, there is a Jon Snow show in development,” Martin wrote Thursday on his personal blog. “Our working title for the show is SNOW .”

In the entry on his blog , the author on whose books the award-winning HBO blockbuster was based, teased out a few more details of the potential series, which seems to be much further along than previously presumed.

For one thing, reiterating what GoT star Emilia Clarke told the BBC on Wednesday, Martin says that it was Harington himself who initiated the idea for the new show. The scribe once called the “American Tolkien” by Time magazine also revealed that Snow is partially staffed up.

“Yes, it was Kit Harrington (sic) who brought the idea to us,” the self-described “way too busy,” Martin wrote. “I cannot tell you the names of the writers/showrunners, since that has not been cleared for release yet… but Kit brought them in too, his own team, and they are terrific.”

“SNOW has been in development almost as long as the other three, but for whatever reason it was never announced and it never leaked… until now,” Martin noted.

The trio of previously announced GoT spinoffs in the works are the Amanda Segal-directed 10,000 Ships ; 9 Voyages aka Sea Snake from Bruno Heller; and the Steve Conrad-penned Dunk & Egg prequel series entitled either The Hedge Knight or Knight of the Seven Kingdoms .

News of the Harington GoT spinoff was first broken by THR last week. At the time, sources said the project was in the very very early stages of development.

Today, Martin offered a much more evolved impression of where Snow was at:

Various rumors are floating around about my involvement, or lack of same. I am involved, just as I am with THE HEDGE KNIGHT and THE SEA SNAKE and TEN THOUSAND SHIPS, and all the animated shows. Kit’s team have visited me here in Santa Fe and worked with me and my own team of brilliant, talented writer/ consultants to hammer out the show.

All four of these successor shows are still in the script stage. Outlines and treatments have been written and approved, scripts have been written, notes have been given, second and third drafts have been written. So far, that’s all. This is the way television works. Please note: nothing has been green lit yet, and there is no guarantee when or if it will be… on any of these shows. The likelihood of all four series getting on the air… well, I’d love it, but that’s not the way it works, usually.

There are all sorts of reasons pilots never get picked up to series, all sorts of reasons scripts never got shot as pilots, all sorts of reasons great treatments never get sent to script. That’s the way the business works. I learned that a long time ago, during my first go-round in television. BLACK CLUSTER. STARPORT. THE SURVIVORS. DOORWAYS. FADEOUT. Those were just a few of my stillborn children from those years. I mourn them still. This is a new day, though, so… here is hoping one or two or three or all four of the GOT spinoffs make it to air.

HBO had no response today to Martin’s blog post.

If Snow does make it to series, it would of course not be the first time Harington’s character returned to the Seven Kingdoms. Jon Snow was supposedly killed off at the end of Season 5 of the blockbuster series. In a surprise to few, the character was resurrected at the start of Season 6.

Martin today may have been responding in part to Clarke, who played Daenerys Targaryen on all eight seasons of GoT , talking to the Beeb earlier this week. “It’s been created by Kit as far as I can understand, so he’s in it from the ground up,” Clarke said in the article timed to her June 29 UK stage debut in Chekhov’s The Seagull . “So what you will be watching, hopefully, if it happens, is certified by Kit Harington.”

Unlike Martin, Clarke has had and anticipates having nothing to do with Snow or any Game of Thrones spinoffs. “No, I think I’m done,” she told the BBC this week.