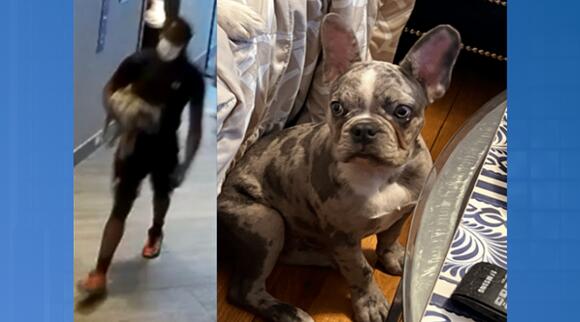 WASHINGTON (DC News Now) — The Metropolitan Police Department said officers were trying to find a man wanted for stealing a French Bulldog from a hotel room in Northwest Friday.

MPD said it happened around 6 p.m. in the 1200 block of 22nd St. NW around 6 p.m. The owner of the dog reached out to DC News Now prior to police putting out information about the arrest.

She said she was staying at Embassy Suites by Hilton Washington DC Georgetown. She said she has epilepsy and that 6-month-old Hugo is her companion animal. She added that she paid $4,000 for him.

Hugo is gray and white. His left ear doesn’t always stand up straight. The owner shared a picture of him with DC News Now which police released along with several others.

Additionally, the police department put out pictures of the person accused of taking Hugo. One of those pictures show the person carrying the 6-month-old dog.