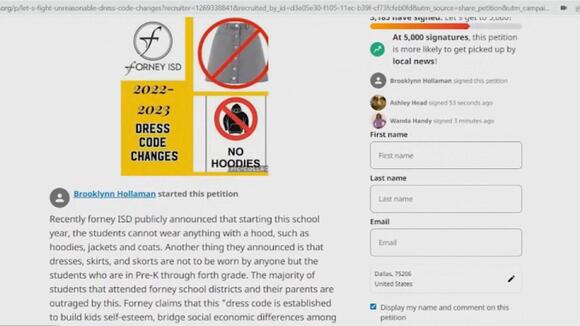 FORNEY, Texas (CBSDFW.COM) — Forney ISD revealed its new dress code for students, and some of the changes have parents and students talking.

One of the new changes prohibits students from wearing hoodies indoors. This includes jackets and coats with hoods, dresses, skirts, and skorts for students in fifth grade and older.

The district did not want to talk on camera on Thursday, but said in a written letter to parents that the new dress code is meant to improve student self-esteem and to bridge socio-economic differences among students and released a YouTube video explaining the changes.

The goal is “to have a safe, enjoyable and exciting learning environment at Forney ISD,” Superintendent Justin Terry said in the video.

Some of the students impacted, like Brooklynn Hollaman, 15, are not happy with the new policies. “Occasionally i like to wear dresses and skirts to school,” she said, “I think it’s wrong that they’re taking away options for us.”

Hollaman’s father agrees that these new rules are too strict.

“Taking away things that are the norm and have been the norm and just adding further restrictions because a select few students maybe aren’t doing what they’re told,” said Derik Hollaman.

“I understand it takes the focus away from the kids having to worry about what they are wearing and things like that and it’s enough notice ahead of time that we can prepare,” said Limatoc.

The new dress code garnered a lot of attention all around North Texas. B…