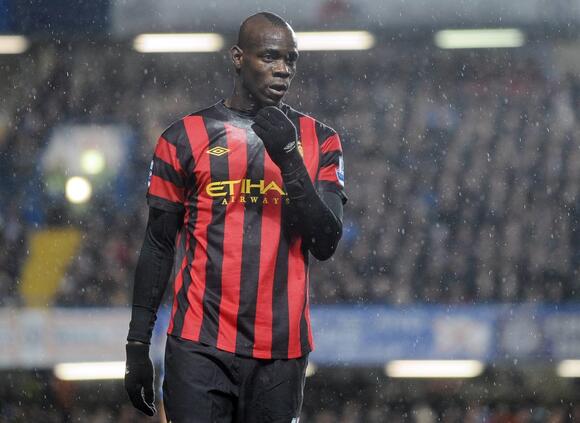 Ex Man City star Mario Balotelli has revealed he was told he’d never play for the club again following his infamous red card against Arsenal in 2012.

Ex Man City star Mario Balotelli has revealed he was told he’d never play for the club again following his infamous red card against Arsenal in 2012.

The Italian striker saw red for two bookable offences after silly challenges on Alex Song and Bacary Sagna, in a game that was pivotal in the title run-in during the 2011/12 season.

Speaking to Man City’s official website, Balotelli said: “It was a second yellow  but my intention wasn’t to make a foul – it was to stop the shot. I went there with too much aggression but it was not my intention to tackle him.”

Man City would go on to lose the game 1-0, with the blame being placed squarely on Balotelli’s shoulders due to his dismissal.

The loss left the blues eight points behind rivals Manchester United in the hunt for their first Premier League title.

City manager Roberto Mancini was understandably irate and lashed out at the striker after the game.

Recalling his managers reaction, Balotelli said: “He (Mancini) was angry. I remember on the bus, he said: ‘You’ll never play again!’”

While Mancini’s anger was justified, his words would not end up coming to fruition.

Balotelli was initially ostracised from the squad and missed the blues’ next five games, however he would go on to complete the ultimate redemption story on the final day of the season.

Having not registered a single assist all season, Balotelli was brought on from the bench with the cityzens trailing 2-1 and would ultimately tee up Sergio Aguero to score the winner in City’s iconic 3-2 win against QPR, securing the Premier League title.

Reflecting on the crucial assist the 31-year-old said: “I don’t remember who was the defender from QPR but he was pushing me and the ball went a little too far. I saw Sergio running and Kompany running the other way. I slid and tried to give it to him in the space and it was good!

“I always compare this moment with winning the Champions League with Inter. This was one the three best moments I had in my career.”