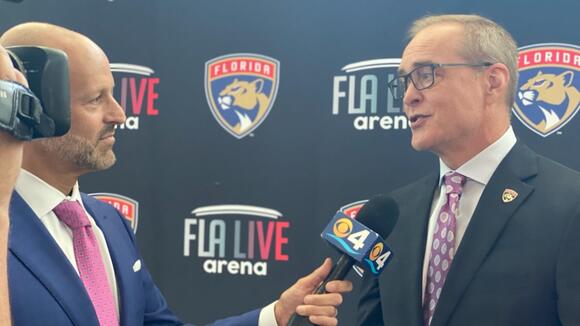 SUNRISE – Paul Maurice’s journey toward becoming the new coach of the Florida Panthers included a fortuitous flick of the remote control, plus was aided by a college admissions department.

He was watching games one night in January, a month or so after he stepped aside as coach of the Winnipeg Jets. He stumbled upon the Panthers and quickly told his wife that he was intrigued by their club.

Fast forward a few weeks, and Maurice’s son got admitted to the University of Miami. It was another sign.

The Panthers hope he’s right. Maurice was introduced Thursday as Florida’s new coach, with the team emphasizing it found in a monthlong search his experience – he has the fourth-most games and seventh-most wins of any coach in NHL history – makes him the right fit.

“When we spoke to Paul Maurice, it was overwhelming that this was the man to be a real fit,” Panthers general manager Bill Zito. “He was the fit to take us into the challenges that are ahead of us moving forward, as we move forward to ultimately what our goal is.”

Zito called Maurice last week to start the interview process, which led to his hiring. Zito was a longtime agent in the NHL but had never actually met Maurice, though had several players who had played for him through the years.

Whatever Zito said to Maurice worked, and worked quickly.

“The interview process was wonderful,” Maurice said. “I don’t know how much time you spend with Bill, but he can jack you up about hockey in about 15 minutes, right? So, I’m in a lather an hour into the meeting and ready to go. And that’s what drives me, and that’s what I love. Really smart, passionate people that want to put on not just a great game, but a great program for the community.”

Maurice simply felt like he needed a break. And then he watched the Panthers play from his couch about a month later. He no longer needed a break, and that feeling was cemented when he began his talks with Zito.

“They’re working on things,” Maurice said. “They have a plan if this happens, a plan if this happens. And they’re ready to work and you know right away, ‘I want to be a part of this.’ So that switch got flipped real fast and it wasn’t from, ‘I’m not coaching anymore.’ It was, ‘I’m only going to a place that I think I can make a difference.'”

Maurice has been an NHL head coach for the better part of 30 years, and has yet to win a Stanley Cup.

Same goes for the Panthers. They made the final in 1996, were moribund for most of the next quarter-century, then got things rolling in recent years, won the Presidents’ Trophy this season and have most of their star core – Aleksander Barkov, Jonathan Huberdeau, Aaron Ekblad, Sergei Bobrovsky and more – under contract for at least next season.

They have some roster questions, some salary-cap complexities to navigate this summer and it remains unclear if Andrew Brunette – who was promoted from assistant to interim coach when Joel Quenneville had to step down last fall – will be back with Florida. The Panthers want him to stay, as does Maurice.

But the end goal is clear: The only thing that’ll make next year an absolute success is hockey’s ultimate…