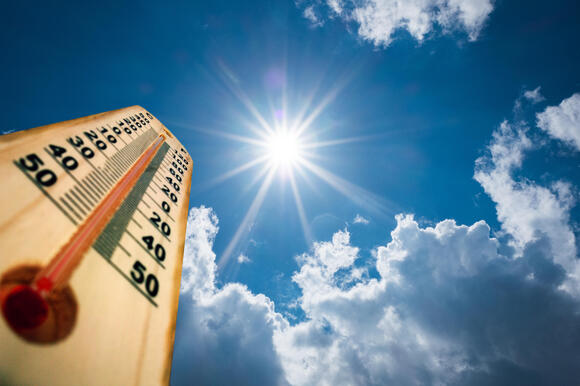 BOSTON – High temperatures Thursday will be near to slight below average once again.

Then, we start turning up the heat and humidity as we head into the weekend. On Friday many locations (just inland) could hit or top 80 degrees with a bit more humidity as well.

This weekend bring a chance at 90 degrees and that is where today’s blog picks up the story.

Ninety degrees has long been a summer benchmark here in New England. In many parts of the country, they barely take notice when the mercury tops 90. Here it is a sign of a truly HOT day. In recent times (the last 30 years), Boston averages about 15 days of 90+ per year. (1 in May, 3 in June, 6 in July, 4 in August, 1 in September).

Compare that with say Dallas, Texas, where they average 106 days of 90+ and you can see why a 90 degree day is a bit more meaningful up this way.

By this time of year, on average, Boston typically has hit 90 a handful of times. Last year by this date we had already done it 8 times, including a whopping 5-day heat wave!

One year later, in 2022, we are still waiting for our first 90-degree day. In order to find a year in which we have waited this long, you have to go all the way back to 2019 (ok so I may have overplayed that a bit), when we didn’t get our first 90 until July 5.

This is a long-winded way of saying that we are due. And that brings us to this coming weekend. For the last several days, and really going back to last weekend, the Northeast has been under a dip in the jet stream. This has caused several areas of low pressure to spin off to our east, none of which has produced a whole lot of rain, but, they have been sending a steady diet of relatively cool air down from the north and east.

Finally, this weekend, a bit of a break in the pattern. The low pressure to our east will get kicked out to sea and, at least for a few days, we will find ourselves under the same giant ridge in the jet stream that has been baking a large part of the country for the last several days.

I am expecting several towns to hit or exceed 9…